THE MOUNTAINS OF CALIFORNIA 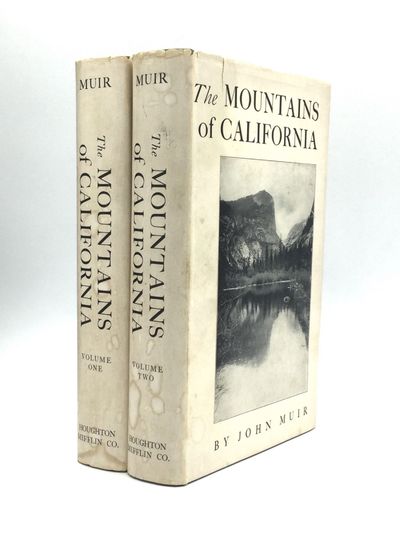 by Muir, John
Boston and New York: Houghton Mifflin Company, 1938. Hardcover. Very good/Very good. Muir's first book consists of fifteen previously published articles, some dating from as early as 1875, which aside from some very brief detours to the Coast Range and the southern San Gabriels, concern the flora, fauna, and geology of the Sierra Nevada. As recorded here, Muir theorized that the granite face of the Sierra had been shaped and scoured by glaciers, an idea that was rejected and even mocked by Josiah Whitney and other professional geologists of Muir's day. Time vindicated Muir, as it has his book - The Mountains of California remains California's most popular work of natural history. Fourteen plates, with two maps (one folding). Octavo, two volumes. Original green cloth bindings, with gilt titles. Mild offsetting to the front endpaper in the second volume. Period bookseller's label to each rear pastedown. In the scarce dust jackets, with the adverstisement for John of the Mountains (1938) on each front flap. The dust jackets are a bit toned, more so along the spines, with some minor stains; otherwise very good. Not in Kimes. (Inventory #: 72415)
$100.00 add to cart Available from Johnson
Share this item

Lincoln, Nebraska : Lincoln Auto School , 1911
(click for more details about LINCOLN AUTO SCHOOL: "Most Thorough, Practical and Up-to-Date Automobile School in the West)
View all from this seller>