Kluby kollektsionerov SSSR: katalog (mesto, dni i vremia vstrech) [Clubs of collectors in the USSR: a directory (places, days and times of meetings] 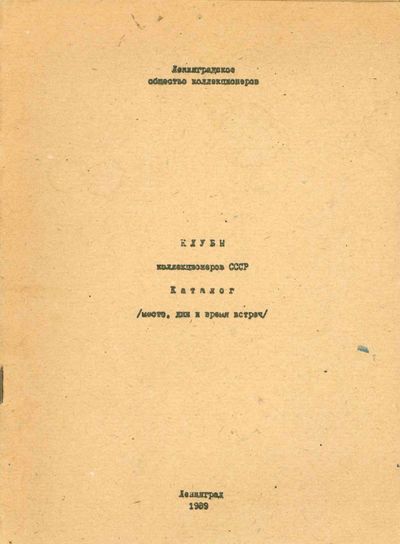 by Nikitin, Anatolii Ivanovich, compiler
Leningrad: Leningradskoe obshchestvo kollektsionerov, 1989. Octavo (21.5 × 16 cm). Original printed wrappers; 19 pp. Signed and inscribed by the compiler to a fellow collector. Very good. First edition of this directory, which lists Soviet collector circles by type (such as phalerists, numismatists, as well as collectors of postcards and printed ephemera) and by town, along with their meeting times and places. In total, over three hundred clubs all over the Soviet Union are listed, in places such as Arkhangalesk, Baku, Batumi, and Barnaul.

With a brief preface that apparently reflects the increasing openness to private collectors in the Soviet Union during Perestroika. The compiler mentions the role played by collectors in preserving cultural heritage and contributing to public museum holdings.