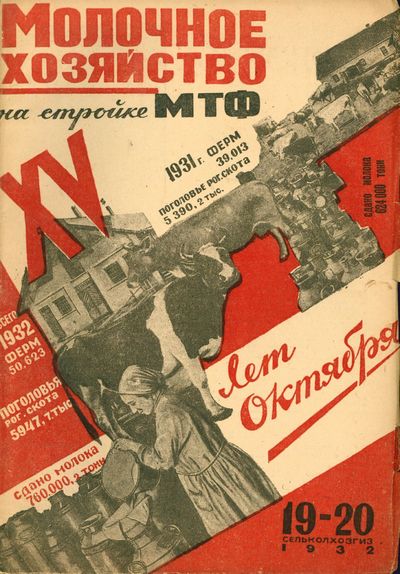 Sel'kolkhozgiz, 1932. Octavo (25cm Ã— 17.5cm). Original photo-illustrated wrappers (not attributed); 48 pp. Very good; trace of mailing label to rear wrapper. Special issue of a long-standing journal on dairy farming, which was the continuation of a pre-revolutionary trade periodica. It was renewed in 1925 and covered such topics as dairy farming technology, the price of milk in the USSR and abroad, as well as union matters. In 1930, the journal became the official print organ of the newly collectivized kolkhoz dairy farmers' union and reflected the process of collectivization. This issue is devoted to the results of fifteen years of Soviet industrial and agricultural construction. With an anonymous photomontage design -- surprisingly striking for such a niche publication -- incorporating red and white stripes, farming scenes, and statistics of milk cows in the Soviet Union. As of October 2020, no copies traced via KVK, OCLC. (Inventory #: 50828)
$250.00 add to cart or Buy Direct from
Bernett Penka Rare Books
Share this item