THE TABLES OF THE LAW and THE ADORATION OF THE MAGI 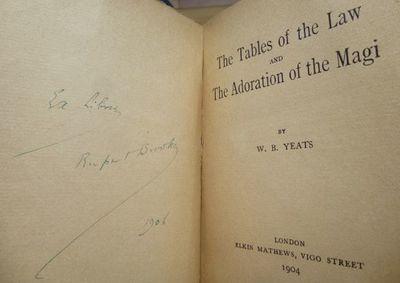 by (Brooke, Rupert - his copy) Yeats, W.B.
1904. [W.B. Yeats and Rupert Brooke] London: Elkin Mathews, 1904. 4 pp undated ads. Original blue wrappers decoratively printed in black. First Published Edition, issued in wrappers by Elkin Mathews as No. 17 in the "Vigo Cabinet Series." This pair of very early Yeats tales had been privately printed in 1897, with a portrait of Yeats by Jack B. Yeats (not in this 1904 edition). At that time Yeats wrote (in John Quinn's copy), "The portrait which is by my father, & the Latin which is by Lionel Johnson, are the only things which are worth anything in this little book." But as he points out here in his 1904 Prefatory Note, "These two stories were privately printed some years ago. I do not think I should have reprinted them had I not met a young man in Ireland the other day, who liked them very much and nothing else that I have written." According to James Joyce's brother Stanislaus (MY BROTHER'S KEEPER, pp 182-186), Yeats is here referring to the first time James Joyce and W.B. Yeats ever met -- though Stanislaus says that it was not "the other day" but a year or two before 1904, and that the "and nothing else that I have written" was added by Yeats for dramatic effect. Legendarily, but confirmed by Stanislaus, at this initial meeting James Joyce said to 17-years-older Yeats "I regret that you are too old to be influenced by me." This copy is in the primary binding of blue wrappers; copies were later issued in green cloth, and there was a subsequent 1904 edition published by The Shakespeare Head Press. Condition is near-fine (expert restoration of the yapped fore-edge of the front wrapper, the brittle text paper browned as always) -- remarkable for such a fragile volume. Wade 25. Housed in a handsome morocco-backed clamshell case. Provenance: the case bears the leather bookplate of of John Henry v. Schröder, who formed a major collection of books and manuscripts of Rupert Brooke (see his 1970 book on the collection). Additional provenance: the reason this book was in Schröder's collection is that the half-title verso is inscribed, "Ex libris | Rupert Brooke | 1906". In 1906 Brooke was just turning 19, and transitioning from Rugby School (where his 1905 Prize Poem had been published) to King's College, Cambridge -- where among other achievements, he would go skinny-dipping with Virginia Woolf (according to herself). Brooke went on to become a peripheral member of the Bloomsbury Group, though some have surmised that its members (female and male) might have been attracted to him more for his looks than for his verse. Certainly Virginia might have felt that way! -- but also, Yeats called him "the handsomest young man in England." It all came to an end in April 1915, when Brooke died of sepsis on board a troop ship en route to the Dardanelles (he is buried on an Aegean island); he never quite saw combat, but he is today known as the premier poet of the Great War. In all, this is quite an association copy. (Inventory #: 14631)
$5,500.00 add to cart or Buy Direct from
Sumner & Stillman
Share this item

1854
(click for more details about THE DODD FAMILY ABROAD)