Collection of Autograph Letters Signed by a popular novelist 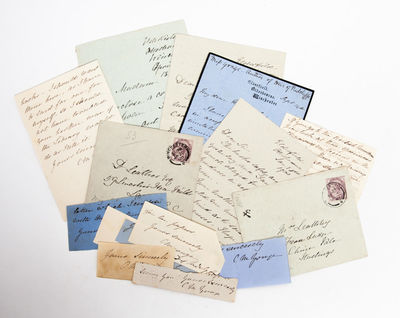 In her own time, Yonge was noted as a writer who spoke "chiefly to young people, especially young girls, and her books are the result of a strong ethical purpose" (The Times, 1901). Admired among Pre-Raphaelites including Morris and Burne-Jones, referenced by Alcott, and an inspiration to Tolstoy, Yonge used her platform to promote the work of other women as well. Her late-career bibliography What Books to Lend and What to Give helped young readers of all sexes find books of interest -- and particularly books by women authors (including her own), which were heavily featured in the 955 book list. The letters in this collection reveal the personal side of Yonge's endeavors. In the earliest letter dated 1889, she writes "Dear Madam, I enclose a copy of the poem. It was written out by a young girl at school (a young lady) who would be much pleased with any addition to her pocket money that you may be kind enough to send her." It is an important and complex move, performed concisely. For here Yonge shares a young woman's literary product with another woman, forming a connection and expanding the girl's network. She also encourages both the recipient and the girl writer to see her writing as both creative and professional -- it is a labor and a product deserving of financial payment, it is a possible career path.

The second and third letters, written three months apart to a mother and son, also support women's work in the literary economy, though in a different way.* In the first, she praises The Autobiography of Mrs. Gilbert as "a delightful book, and if you cannot easily procure it, I shall be happy to lend it to you...what wonderfully able people she and her sister Jane were...I had their nursery rhymes when a child but I am afraid they have not been republished...Thank you much for this book of verses." Clearly, the two women are engaged in an exchange of books -- published volumes as well as the ideas they inspire. For Yonge, the work of two women now out of print remains important to remember and to spread. And we learn further that the verses Mrs. Leathes shared were her own. To the lady's son, Yonge says "The books safely arrived yesterday...Your mother's letter interested me much. She was so kind as to send me her verses. I hope Mrs. Gilbert's memoir arrived in time to give her pleasure." Thus, their correspondence was a continual one, with books by women a central component.

The remaining material, though brief, provides supplementary examples of Yonge's engagement with women. Courteously accepting the invitation of a Mrs. Shipley in 1900, Yonge remains social in the final year of her life. And in the enclosed fragments, she discusses procuring books for her Library, and recommending exhibits at the British Museum.

*Yonge does, however, create a discrepancy in the names, as she addresses one Mrs. Leathely and the other Mr. Leathes. The former surname does not appear in census records for the period. It seems likely both mother and son are members of the intellectual Leathes family, which included novelists Matilda Leathes and Mary Sherwood. (Inventory #: 4059)
$1,250.00 add to cart or Buy Direct from
Whitmore Rare Books
Share this item