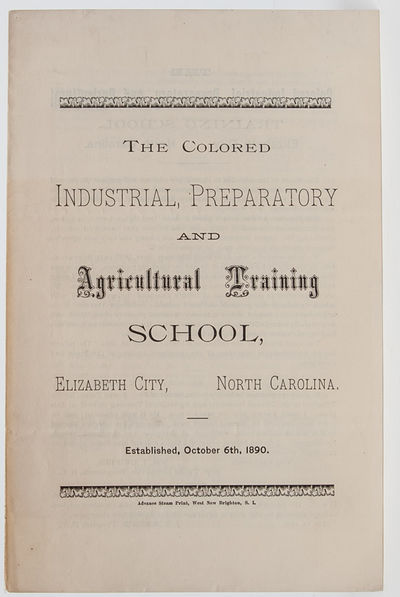 by [BIPOC] [African American Education]
Elizabeth City, North Carolina: Advance Steam Print, 1893. First edition. Bifolium measuring 210 x 140mm. 4 pages. Small split to lower fold. Slight toning along spine; offsetting to internal pages. In all, clean and unmarked. A scarce example of early efforts in the Black community to establish career training in the South, in the decades following Emancipation. The only copy on the market, OCLC records no surviving copies in institutions.

"Land grant universities have been the foundation of America's agricultural productivity for over a century. Their beginnings were based on the First Morrill Act of 1862, which permitted states to receive federal support in the form of land to establish colleges or universities...to teach agriculture, military tactics, and mechanical arts. In 1890, Congress passed the Second Morrill Act of 1890, which inspired the creation of the nation's 17 historically Black land-grant colleges" (SCSU). Founded in that same year, the Colored Industrial, Preparatory and Agricultural Training School represented in this pamphlet participated in this historic effort. Supplying Black Americans with career-focused education that would better position them socially and fiscally to remain in the South rather than migrate North for work, the programs aimed to build on and formalize the community's decades of knowledge about the land while giving its members the autonomy to build lives of their own. Per the pamphlet, the school which was run by Howard University graduate Rooks Turner sought an additional $20,000 in funding to "enlarge our grounds and erect suitable buildings thereon." After all, the federal funds could only go so far, and it was the founders' goal to "make the School self-sustaining as soon as possible," ensuring long-term its ability to "thoroughly educate and prepare the colored youth for teachers, to begin the collegiate and professional studies, train them in the various branches of industry, and better fit them for usefulness and self-reliance." Within the pamphlet are testimonials about the school's mission, accomplishments, and leaders that urge the wider public to invest in the project. In some sense and in a different iteration, it appears that the school achieved this, merging with the Elizabeth City State Colored Normal School which was founded in 1892 to provide teacher training; the latter has since become Elizabeth City State College. (Inventory #: 4068)
$1,250.00 add to cart or Buy Direct from
Whitmore Rare Books
Share this item