Manuscript Speech in Support of Women's Rights, Connecting the Vote to Income Equality 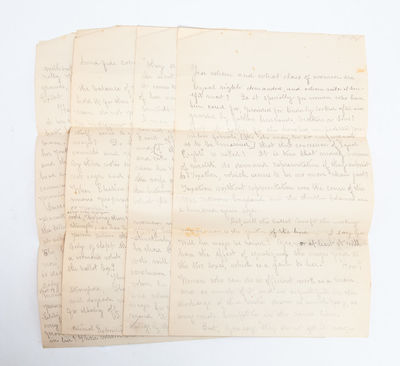 by [Woman Suffrage] Anonymous
[N.P.], Late 19th century. Comprised of four manuscript pages on four unlined legal sheets, composed in a single hand in pencil. Trifold lines on each. Text incomplete. Possibly an essay, the use of brackets and underlining for emphasis heavily imply that the present work was intended for public reading. Anonymous in nature, the writer's gender, geography, and age remain unknown. What becomes clear, however, in the document left behind is that logical arguments for women's rights were becoming mainstream and familiar across the country, and were being used widely in grassroots efforts.

As the National Woman Suffrage Association geared up for the next phase of its campaign at the turn of the century, its rising leader Carrie Chapman Catt increased the number of pamphlets and printed materials being distributed on the organization's behalf. These provided pro-suffrage activists with rhetorical responses, phrases, arguments, and a vocabulary that was unified and shared across the cause. Many of them are present throughout this speech, suggesting Catt's success in reaching and shaping grassroots activity. "Taxation without representation," "Will the balloy benefit the working woman is the question of the hour," and "'The exercise of the right of the franchise will degrade woman' is a narrow minded coward's device" are only a few examples of how this piece links to a more national movement.

Susan B. Anthony, Elizabeth Cady Stanton, and their protege Catt were also aligned in using reason, logic, law, and economics as the basis for women's equality arguments. The present speech occasionally departs into broader praise for women's contributions -- for example, to the Cotton State International Exhibition and to the World's Fair at Chicago -- but it leans most directly into an economic argument. Tackling the misguided anti-suffrage claim that giving women the vote or giving women equal pay will threaten male power, the writer shows how equality in both fields will be to the benefit of all parties. Income inequality, the writer reasons, is a root cause of poverty. "A man will set his price upon his labor, and if he cannot get it, will fold his hands and say 'I can't afford to work for less wages and will not,' and if there is no woman who will come to the rescue and take the position for less, the employer pays the man his price; but it is no unusual thing for the wife and daughters of the man to support him through the interim, or even longer, on half wages." Ultimately, "women who can do as efficient work as man and as much of it and are faithfull in the discharge of their duties deserve as much pay." The same argument is then applied to the franchise, to the combining of men and women's voices to create political change and to shape the future.

A research rich opportunity for studying activist rhetoric, the spread and use of activist vocabularies, grassroots versus national campaigns, and the connection of economic and employment concerns to the vote. (Inventory #: 4060)
$1,000.00 add to cart or Buy Direct from
Whitmore Rare Books
Share this item