The Breakfast Book: A Cookery Book for the Morning Meal, of Breakfast Table 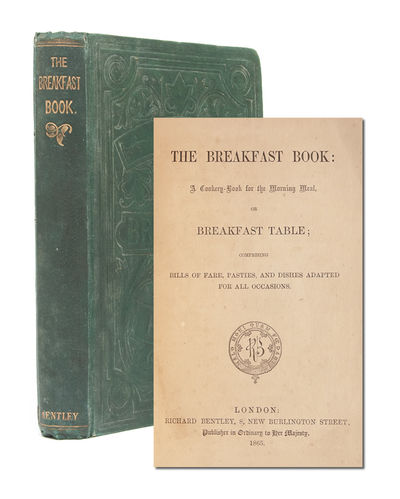 A cook book that signaled the buying power and the shifting needs of middle and working class women, Georgiana Hill's Breakfast Book aided its audience in quickly and efficiently answering an increasingly frequent question in their home-management. She opens, "What shall we have for dinner, is a question easily answered; but what can we have for breakfast is quite another thing. The object of this work is to solve this domestic difficulty." After all, while the infamous full English breakfast had existed since the 13th century, it was a hallmark of elite households and country estates. "The great English country houses were important hubs of local society, where breakfast was considered the most important meal of the day and a key social event, as the breakfast table was an opportunity for the gentry to display the wealth of their estates in the quality of the meats, vegetables, and ingredients used for breakfasts...It wasn't until the Industrial Revolution that the English breakfast became not just a meal for the wealthy, but for the masses as well...for aspirational Victorians, breakfast was an opportunity to demonstrate wealth and good taste" (Bruce). The present work, written by a single woman of the middle class, approached the issue with clarity and knowledge of its audience's needs. Hill's works were described by the London City Press as having "the double merit of being cheap and simple" while the Leeds Influencer declared that her works were not "a mere collection of receipts, but a short treatise on cookery, in which practical instructions of great value are given." In this sense, by presenting a book broken down into common family breakfasts, dishes quickly prepared, and then a selection of dishes that could be mixed or matched based on the size and need of the dining party, Hill aided women with social mobility. She educated them into more sophisticated household management, encouraged them to rise to the occasion as hostesses, and ensured that rather than committing faux pas they would present themselves elegantly. Near Fine. (Inventory #: 4071)
$1,650.00 add to cart or Buy Direct from
Whitmore Rare Books
Share this item