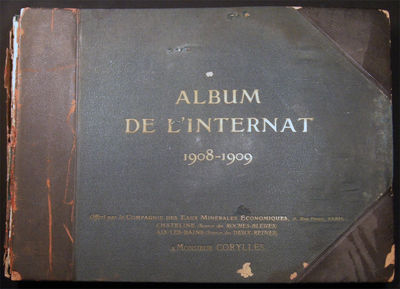 by (France - 20th Century - Photography - History of Medicine)
Paris, France: Compagnie Des Eaux Minerales Economiques, 1909. A photograph album, composed of 29 heavy cardstock leaves, each titled with a French hospital, with a mounted photograph of the interns of 1908-09. On the mounts, printed below the images are the surname-identification of the new doctors, along with a quote from a famous medical personage. Photographic studio not identified aside from the printed notice in the surround of "Cliche Femina." Our research indicates that these albums were produced by the Compagnie des Eaux Minerales... as promotional devices; the cover titles are further personalized, and include the name of one of the graduates, A Monsieur Corylles (actually Coryllos, from the Hopital Cochin Paris. Dr. Coryllos (1880-1938) was an eminent thoracic surgeon and pioneer in the use of the mobile field hospital saving lives during military conflicts) Every photograph, black and white, silver gelatin process; approx. 4 ¾" x 6" size, is characterized by extraordinary clarity and very professionally taken; several of them presenting the graduating physician's candid expressions of humor - one posing with a monkey on his back, another lugging a huge travel-box by a rope over his shoulders, many with pet dogs & cats, one with what appears to be a monstrous lizard; in another, three men sit astride sheep and a goat; other portraits promoting expressions of extreme gravitas. The Hopital Des Enfants Malades with two women identified, Mlle. Bouteil and Mme. Debre; the Hopital de la Pitie with Mme. Long; Mlle. Dechaux at Hopital Claude-Bernard (Aubervilliers); two of the images, from the Hopital Bichat & Hopital Beaujon, with unidentified women posed with the groups. The images appear to have been taken on the grounds and building forecourts of these medical establishments, including: Hopital Andral & Bastion 27 et 29; Beaujon; Berck Sur-Mer; Hospice de Bicetre; Bichat; Boucicaut; Bretonneau; Broca; Broussais; de la Charite; Claude-Bernard (Aubervilliers); Cochin; Cochin (Annexe); Maison Dubois; des Infantes Assistes; des Infantes Malades; Herold; Hotel-Dieu; Hospice D'Ivry; Laennec; Lariboisiere; La Maternite; Necker; de la Pitie; Saint-Antoine; Saint-Louis; Hospice de la Salpetriere; Tenon; and Hopital Trousseau. Heavy oblong format covers, about 8 pounds shipping weight. Approx. 11" x 14" size; gilt titled green pebbled cloth & leather corners; binding damaged, worn, spine covering gone; all photographs in very good condition.. First Edition. Hard Cover. Good. (Inventory #: 26971)
$650.00 add to cart or Buy Direct from Certain Books
Share this item
Certain Books
Offered by

The Exiles of Florida: Or, the Crimes Committed By Our Government Against the Maroons, Who Fled from South Carolina and Other Slave States, Seeking Protection Under Spanish Laws

Columbus, Ohio : Follett, Foster and Company , 1858
(click for more details about The Exiles of Florida: Or, the Crimes Committed By Our Government Against the Maroons, Who Fled from South Carolina and Other Slave States, Seeking Protection Under Spanish Laws)

Philadelphia, Pennsylvania : C. & A. Conrad & Co., Et al , 1810
(click for more details about An Account of the Expeditions to the Sources of the Mississippi and through Western Parts of Louisiana, to the Sources of the Arkansaw, Kans, La Platte, and Pierre Jaun Rivers...)
View all from this seller>