A CONTINUATION OF THE NARRATIVE OF THE INDIAN CHARITY SCHOOL, BEGUN IN LEBANON, IN CONNECTICUT; NOW INCORPORATED WITH DARTMOUTH-COLLEGE, IN HANOVER, IN THE PROVINCE OF NEW-HAMPSHIRE 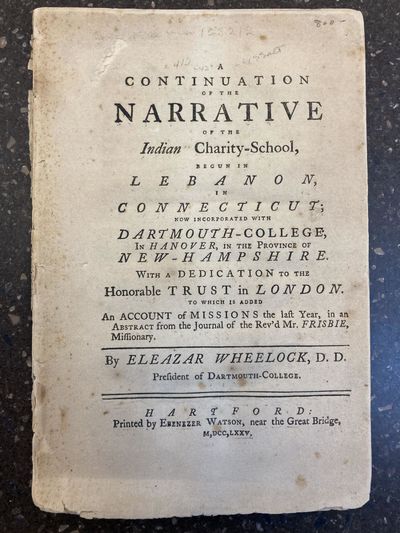 by Wheelock, Eleazar
Hartford: Printed by Ebenezer Watson, near the Great Bridge, 1775. First Edition. Octavo, vii, [9]-31; G; disbound; some wear and chipping to edges; mild foxing; small hole to title page, does not impact text; scarce; shelved case 4. Eleazar Wheelock (1711-1779) was an American Congregational minister, orator, and educator in Lebanon, Connecticut, for 35 years before founding Dartmouth College in New Hampshire. Before founding Dartmouth, Wheelock had founded and run the Moor's Charity School in Connecticut to educate Native Americans. The college was primarily for the sons of American colonists. [wikipedia]


"An authenticated account of monies received and expended, for the use of the Indian charity-school, incorporated with Dartmouth College, from August 24th, 1773, to March 20th 1775: to which is added an earnest recommendation .. With an appendix, containing a short narrative of the mission of the Rev. Mr. Levi Frisbie, Mr. James Deane, and Mr. Thomas Kendal, to the Indians in the province of Quebec."

Self-Published , 1994
(click for more details about White Buffalo Gazette (3 Issues))
View all from this seller>