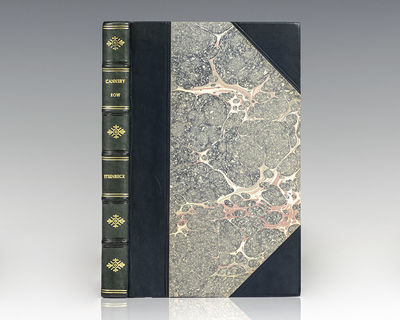 by Steinbeck, John
New York: The Viking Press, 1945. First edition of this classic work by the Nobel Prize-winning author. Octavo, bound in three quarters morocco over marbled boards, gilt titles and tooling to the spine, raised bands. In fine condition. John Steinbeck's picaresque novel, set against the backdrop of the sardine canneries, vacant lots, flophouses and honky-tonks of Monterey, California, "was as complex as [Steinbeck] was. In a way it was a summation of all his conflicts and contradictions, and all that he had learned. It was Steinbeck-funny and deadly serious all at the same time, sentimental and coldly deterministic, loving and satirical, lyrical and yet very precise... Nowhere else in his work is his poetry so well controlled, and nowhere else does he cut quite so deep" (Benson, 554-5). (Inventory #: 120332)
$975.00 add to cart or Buy Direct from
Raptis Rare Books
Share this item