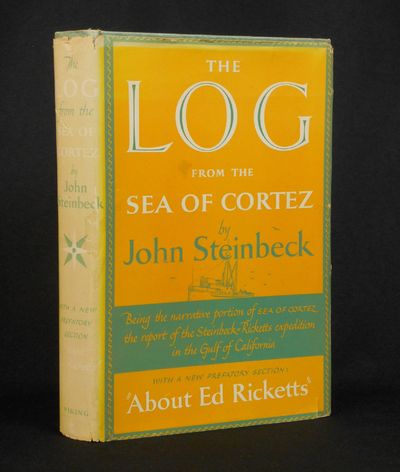 by Steinbeck, John
New York: The Viking Press, 1951. First Edition. Hardcover. Near fine/very good. First edition of the "Narrative Portion" (see details below), first printing, octavo size, 352 pp., in variant sea blue-green binding. Nobel Prize-wining author John Ernst Steinbeck, Jr. (1902-1968) is considered today to be one of the greatest American writers of the 20th century. Many of his works, including "Grapes of Wrath" (for which he won the Pulitzer and the National Book Award), "Cannery Row", "East of Eden" and others have become part of our cultural heritage and have sold literally millions of copies.

This work is based largely on an earlier work Steinbeck co-authored with Ed Ricketts, entitled "The Sea of Cortez", a jointly-authored record of a scientific journey the two took in the Gulf of California. After Ricketts' untimely death, Steinbeck decided to write this separate publication, which includes the first printed appearance of a lengthy (almost 60 pages) biography of Ricketts.

"The Log from the Sea of Cortez" is a narration rather than a scientific journal. Steinbeck wrote this memorial to his friend and companion, re-telling "[the day-to-day story of the trip which they took together to the Gulf of California - a combination of science, philosophy, and high-spirited adventure".

Edward Flanders Robb Ricketts (1897-1948) was the inspiration to Steinbeck for "Doc" in "Cannery Row" and "Sweet Thursday", being described by Steinbeck in the novel thus: "He wears a beard and his face is half Christ and half satyr and his face tells the truth" (n.b., per Wiki).

___DESCRIPTION: Full sea blue-green cloth over boards (a variant binding, not in Goldstone & Payne but known to Steinbeck collectors and specialists), brown lettering and and decorations stamped on the front and spine, red and white map endpapers of "Lower California" (Mexico) with their journey through the Gulf of California marked, black-and-white reproductions of photographs of Steinbeck and Ricketts preceeding the title page; octavo size (8 1/2" by 5 3/4"), pagination: [i-vii] viii-lxvii [lxviii, blank] [lxix, fly title] [lxx, blank], [1-282]. The yellow, green and white dust jacket shows the correct first printing price of $4.00, with a summary of the book on the front flap, publisher's ads for "More Unusual Books on Natural History" on the back flap, short bios of Steinbeck and Ricketts on the back panel.

___CONDITION: Volume near fine, with clean boards, perfectly straight corners with a hint of rubbing, a strong, square text block with solid hinges, the interior is clean, and entirely free of prior owner markings; a minimal amount of rubbing to the head and tail of the spine, the pages lightly toned, else fine. The unclipped dust jacket a solid very good, all component pieces present and attached, with light overall soiling, minor overall edgewear (most noticeable at the head of the spine, with a couple of small chips but no loss of text), and sunning to the spine.

___Swan's Fine Books is pleased to be a member of the ABAA, ILAB, and IOBA and we stand behind every book we sell. Please contact us with any questions you may have, we are here to help. (Inventory #: 20100701)
$550.00 add to cart or Buy Direct from
Swan's Fine Books
Share this item

The Cat and the Moon and Certain Poems

Merrion Square, Dublin, Irland : The Cuala Press [Elizabeth Corbet Yeats] , 1924
(click for more details about The Cat and the Moon and Certain Poems)

New York : Blelock & Co , 1866
(click for more details about Life and Campaigns of Lieut.-Gen.Thomas J. Jackson (Stonewall Jackson))
View all from this seller>