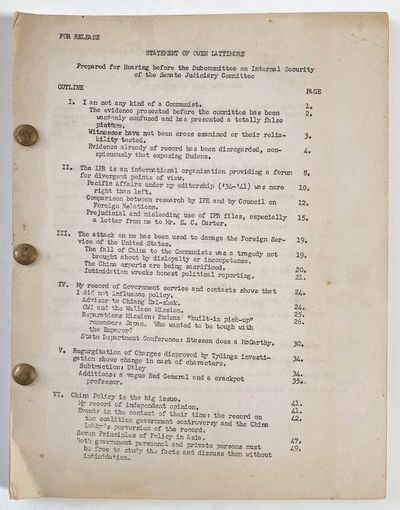 by Lattimore, Owen
n.p., 1952. 50p., mimeographed 8.5x11 inch sheets bound together at left with metal brads. Minor foxing and handling wear. Press release dated February 26. Owen Lattimore, a major scholar of East Asia, had been blamed for debacles in US foreign policy and labeled a communist agent by Joseph McCarthy. In this testimony, he makes a number of arguments, divided into sections with headings such as "I am not any kind of Communist," "The attack on me has been used to damage the Foreign Service of the United States," and "Both government personnel and private persons must be free to study the facts and discuss them without intimidation." On December 16, 1952, Lattimore was indicted on seven counts of perjury for this testimony. The charges were ultimately dismissed. (Inventory #: 259400)
$125.00 add to cart or Buy Direct from Bolerium Books
Share this item