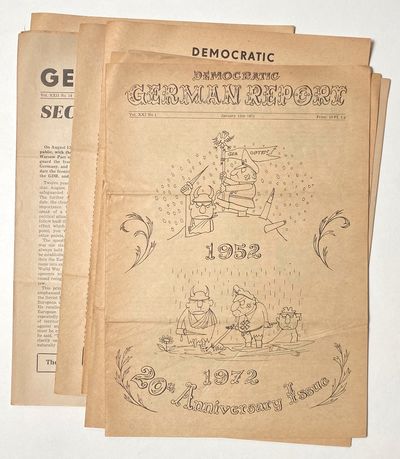 by Peet, John
Berlin, East Germany: Democratic German Report, 1973. Seven issues of the newsletter published in East Germany by a British Reuters reporter who defected in 1950. 8.5x11 inches, generally even toning, folded for mailing. Issues present are vol. 20 no. 9, vol. 21 no. 1, 2; and vol. 22 nos. 14, 15, 19 and 20. Publisher John Peet fought in the Spanish Civil War with the International Brigade, later working for Reuters in British Palestine and covering the Nuremberg trials. He defected in 1950 and from 1952 to 1975 produced the Democratic German Report. Includes an article on the 12th anniversary of the Berin Wall, titled "Secure frontiers, secure peace. (Inventory #: 259385)
$40.00 add to cart or Buy Direct from Bolerium Books
Share this item