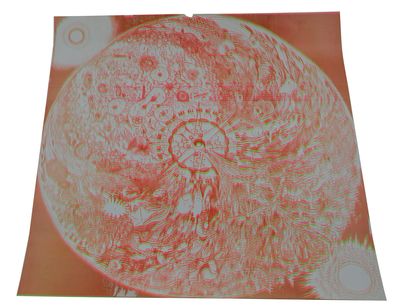 by Wright, Dion
[no place]: [none], 1960. [none]. Near Fine. Single sheet measuring 15.5" x 15.5" with 3-D silkscreen printed in neon green and neon pink. A circular design, very similar to if not a variant of his most enduring work,"Taxonomic Mandala of Evolution" which was exhibited at Mystic Arts World, a Laguna Beach emporium, bookstore and original psychedelic art gallery. Here, the image is seen with the words "we are all one" are repeated near the center. This illustration also appeared on the cover of Haight-Ashbury Tribune #7 in 1967. Near Fine. Small edge-chip. Verso has some paper remnants adhered, perhaps from another copy of this poster or a former backing. Wright was a tail-end participant in San Francisco's psychedelic scene, and painted "Taxonomic Mandala of Evolution" while in a corn crib in Woodstock, New York in 1965-6. During that time he also "sampled the airs" at Timothy Leary's Castalia Foundation in Millbrook, NY. Still an artist today, Wright lives in Flagstaff, Arizona. (Inventory #: 140940829)
$850.00 add to cart Available from
Burnside Rare Books
Share this item
Burnside Rare Books
Offered by

Save Me the Waltz

New York : Charles Scribner's Sons , 1932
(click for more details about Save Me the Waltz)

London : Longmans, Green and Co , 1886
(click for more details about Strange Case of Dr. Jekyll and Mr. Hyde)
View all from this seller>