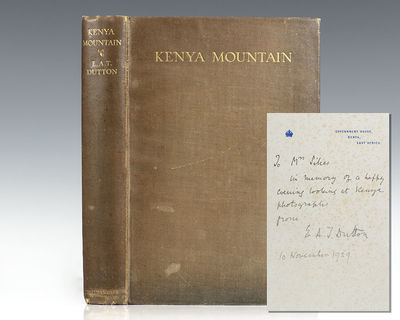 by Dutton, E.A.T. Introduction by Hilaire Belloc
London: Johnathan Cape, 1929. First edition of Dutton's account of his 1926 expedition up Mount Kenya with J.D. Melhuish. Quarto, original cloth, illustrated, folding map of the route taken by Melhuish and Dutton in 1926 at rear. With an autograph letter signed by Dutton tipped in. On Government House, Kenya letterhead, the letter reads, "To Mr. Sikes in memory of a happy evening looking at Kenya photographs from E.A.T. Dutton 10 November 1929." With the recipient's ownership signature to the pastedown. In near fine condition. Kenya Mountain documents the mountaineering expedition of J.D. Melhuish and E.T.A. Dutton in 1926 up Mount Kenya which brought them through the lower regions of the bamboo zone and up to Lewis Glacier and the Curling Pond before their ascensions of Point Lenana and the summit of Batian. (Inventory #: 119650)
$350.00 add to cart or Buy Direct from
Raptis Rare Books
Share this item