OVER THERE WITH THE EIGHTIETH. A NARRATIVE OF PERSONAL EXPERIENCES 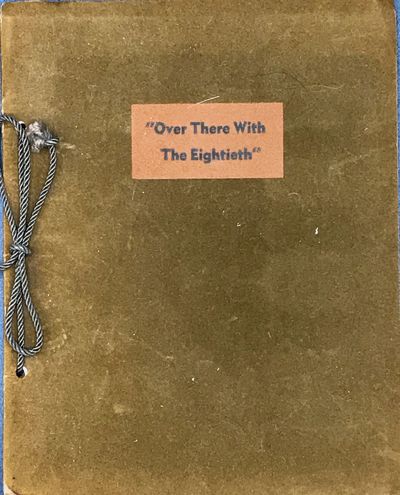 by Blatt, Charles R. (1894-1964)
Patton, Penna: [the author?], nd. 20 cm. (8), 47, (3) pp. Limp suede covers, bound with cord, title printed on front cover. Blatt's narrative, drawn from his own letters home to a friend, of his time in France during World War I. Blatt served with the Eightieth Division, Co. D, 305th Engineers, from Sept. 20, 1917 until he was wounded on Nov. 1, 1918, "eleven days before the Armistice, after service in several sectors." A detailed, literary description of his arrival in France, travels there, training, and time at the front. A very good copy. No listings found on OCLC.
Arriving in France in June 1918, Blatt was at Bayencourt, Hebuterne, etc., repairing roads, trenches, and bridges before his division was sent to fight in the Argonne. Most of the narrative describes this battle and the activities of the engineer corps, essential for their work keeping the heavy artillery moving under difficult conditions. At one point "[a] great many engineers of our regiment were working with frantic haste to put up a bridge on an old foundation (near Bethincourt), and as we got there a number of batteries of artillery were already lined up waiting to cross." His group delivered some duck walks that had been used elsewhere on the battlefield, which they had hand carried for over a mile. Later in the battle they were called upon to construct some 700 yards of barbed wire. During the third phase of the battle for the Argonne Forest, he was wounded in the hip and evacuated. Charles Blatt was born in Pittsburgh in 1894. He served "with distinction and courage" in the 305th Engineers during World War I. Following the war he and his brother built and operated a chain of theaters in Somerset, Pennsylvania. [see his obituary in the "Daily American," Somerset, Pennsylvania, Oct. 26, 1964]. (Inventory #: 65482)
$275.00 add to cart or Buy Direct from
Bartleby's Books
Share this item