GEOGRAPHICAL, STATISTICAL, AND HISTORICAL MAP OF TENNESSEE. No. 28 [caption title] 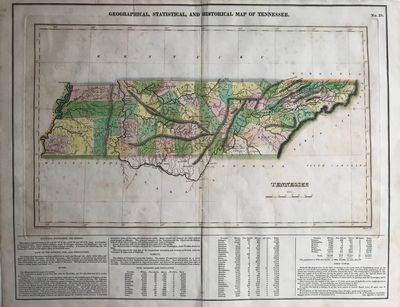 by Carey, H.C., & I. Lea]
[Philadelphia], 1822. Engraved map of Tennessee, 31 x 49 cm., on a 45 x 57 cm. on a double page sheet (short separation along center seam; some scattered foxing). Counties hand colored in pink, yellow and green, Cherokee Lands shown in white. Details of the course of the Tennessee River extending into portions of Mississippi and Alabama are also shown. Map drawn by F[ielding] Lucas, Jr. ; [William] Kneass, sc.,and including the newly formed western counties which were part of the Jackson purchase and cession from the Chickasaw in 1818. Printed text in four columns below the plate mark includes information on the boundaries, soil and productions, rivers, climate, and chief towns. Murfreesboro is mentioned as the capital of the state, which it became in 1817. Civil Divisions and Population for the state are given including white, free black, and slave population figures for each county. From H.C. Carey and I. Lea's "Complete Historical, Chronological, and Geographical American Atlas...." originally published in Philadelphia in 1822, and reprinted with the same number of maps in 1823, 1825, and 1827. [cf. HOWES C133]. (Inventory #: 65481)
$225.00 add to cart or Buy Direct from
Bartleby's Books
Share this item

THE WASHINGTON SANITARIUM AND HOSPITAL

Takoma Park : np , 1920
(click for more details about THE WASHINGTON SANITARIUM AND HOSPITAL)
View all from this seller>