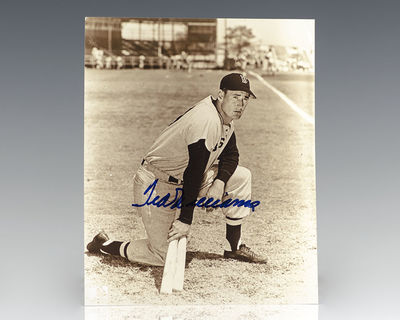 by Williams, Ted
1942. Signed photograph of baseball legend Ted Williams. Boldly signed "Ted Williams." The photograph measures 9.75 inches by 8 inches. In fine condition. Ted Williams was a baseball player and manager, who played his entire 19-year Major League Baseball career as a left fielder for the Boston Red Sox from 1939 to 1942 and 1946 to 1960, excepting service time during World War II and the Korean War. Nicknamed "The Kid", "The Splendid Splinter", "Teddy Ballgame" and "The Greatest Hitter Who Ever Lived", Williams is regarded as one of the greatest players in baseball history. Williams was also an outstanding fielder, especially in the difficult left field of Fenway Park in Boston, where he played his entire Major League career at that position. Williams was a seventeen-time All-Star, a two-time recipient of the American League Most Valuable Player Award, a six-time American League batting champion, and a two-time Triple Crown winner. He finished his playing career with a .344 batting average, 521 home runs, and a 0.482 on-base percentage, the highest of all time. His batting average is the highest of any major league player with 302 or more home runs. (Inventory #: 119092)
$650.00 add to cart or Buy Direct from
Raptis Rare Books
Share this item

The Plays of Shakespeare.

by Shakespeare, William. Edited and Annotated by Charles and Mary Cowden Clarke

London : Cassell, Petter, and Galpin , n.d.
(click for more details about The Plays of Shakespeare.)
View all from this seller>