The Garden of Eden. 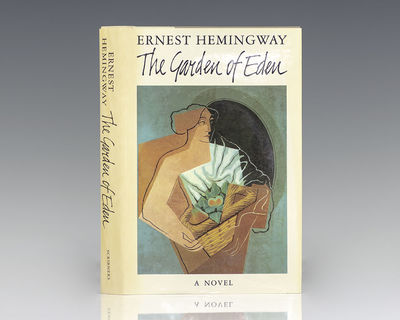 by Hemingway, Ernest
New York: Charles Scribner's Sons, 1986. First edition of this posthumous novel by Hemingway. Octavo, original half cloth. Fine in a fine dust jacket. Jacket design by Marek Antoniak. A sensational bestseller when it appeared in 1986, The Garden of Eden is the last uncompleted novel of Ernest Hemingway, which he worked on intermittently from 1946 until his death in 1961. Set on the Cote d'Azur in the 1920s, it is the story of a young American writer, David Bourne, his glamorous wife, Catherine, and the dangerous, erotic game they play when they fall in love with the same woman. "A lean, sensuous narrative...taut, chic, and strangely contemporary," The Garden of Eden represents vintage Hemingway, the master "doing what nobody did better" (R. Z. Sheppard, Time). (Inventory #: 120321)
$75.00 add to cart or Buy Direct from
Raptis Rare Books
Share this item