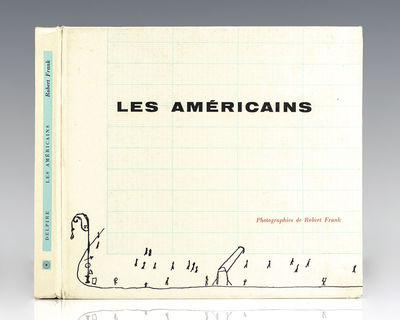 by Frank, Robert
Paris: Delpire, 1957. First edition of the photographer's masterpiece with 83 black-and-white full-page photogravures. Oblong quarto, original boards illustrated by Saul Steinberg. In near fine condition. ack Kerouac wrote in his preface of The Americans, "Robert Frank he sucked a sad poem out of America onto film, taking rank among the tragic poets of the world. To Robert Frank I now give this message. You got eyes." Frank’s Américains eventually achieved legendary status as "the most renowned photobook of all It struck a chord with a whole generation of American photographers Many memorable photobooks have been derived from this mass of material. None has been more memorable, more influential, nor more fully realized than Frank’s masterpiece" (Parr & Badger I:247). "From the more than 20,000 images that resulted, Frank eventually chose 83 of them and arranged them into four chapters ‘With these photographs,’ he later wrote, ‘I have attempted to show a cross-section of the American population. My effort was to express it simply and without confusion. The view is personal’ Such a simple intention for a book that would so alter the course of modern photography" (Roth, 150). (Inventory #: 120922)
$2,400.00 add to cart or Buy Direct from
Raptis Rare Books
Share this item