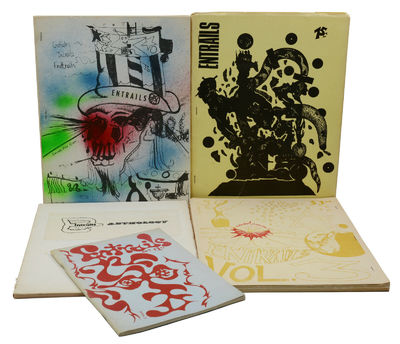 The entirety of the little poetry magazine Entrails, edited by Gene Bloom until his imprisonment before the release of the fourth issue. The vibe of the publication was scatological, much in the vein of Ed Sanders' Fuck You. The first issue stated on its first page: "We are a NON-CENSORSHIP MAGAZINE." Issue #2 includes a tiny envelope stamped "Beat Nickel Bag" with something in it that shakes when rattled; it has not been opened, though. The following issue has a similar bag stapled to the back wrap, empty. Contributors included many of the most prominent Meat Poets: Charles Bukowski (in three issues), Douglas Blazek, D.r. Wagner, William Wantling, Harold Norse, The Willie, and Steve Richmond as well as d.a. levy, Tuli Kupferberg, Ted Berrigan, Clarence Major, and Lyn Lifshin. Uncommon as a complete run. (Inventory #: 140940832)
$600.00 add to cart or Buy Direct from
Burnside Rare Books
Share this item
Burnside Rare Books
Offered by

New York : Atheneum , 1973
(click for more details about War)
View all from this seller>