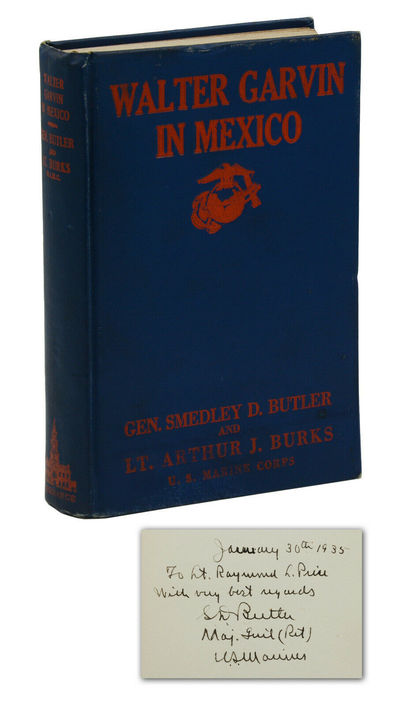 by Butler, Smedley; Arthur J. Burks
New York: Dorrance and Company, 1927. First Edition. Very Good. First edition. Signed by Smedley D. Butler on half-title, inscribed to former owner, a Lt. Raymond A. Price (whose impressions are on the prelims), and dated January 30, 1935. 238 pp. Bound in publisher's navy cloth with red lettering. A Very Good copy with light dampstain and slight warp to bottom of front board, small nick to fore edge of pages, edges a bit foxed and dust-soiled, lacking jacket. Text clean. A rare signature from Butler, an extremely popular figure nicknamed "Old Gimlet Eye" who was the most-decorated Marine in history at the time of his retirement. By 1935, the time of this signature, Butler had undergone political reawakening, condemning war and its profiteers with his classic book War is a Racket. He also had helped to expose a plot by American industrialists to stage a fascist coup against FDR. The establishment and the nascent military-industrial complex had created one of their greatest foes, obscure as he is today. (Inventory #: 140940834)
$3,000.00 add to cart or Buy Direct from
Burnside Rare Books
Share this item
Burnside Rare Books
Offered by

New York : Doubleday, Doran and Company , 1938
(click for more details about Rebecca)
View all from this seller>