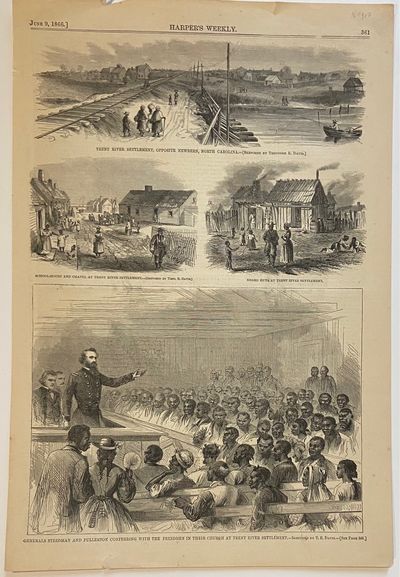 by HARPER'S WEEKLY
New York: Harper's Weekly, 1866. unbound. Theodore R. Davis. Woodcut engraving. Sheet measures 15.75 x 10.5" This woodcut engraving from Harper's Weekly depicts several views of Trent River Settlement, a freedmen's village outside New Bern, North Carolina. The four illustrations include a view of the settlement, the school house and chapel, "negro huts", and "Generals Steedman and Fullerton conferring with the freedmen in their church". The print is in good condition with some chips, tears, and minor toning to margins - not affecting the image. Issued in the June 9, 1866 edition of Harper's Weekly. Harper's Weekly was a New York-based illustrated political magazine published from 1857 until 1916. The magazine featured foreign and domestic news, fiction, essays on many subjects, and humor. Its most well-known contributor was Thomas Nast, who made his career doing political cartoons for the publication. (Inventory #: 298525)
$85.00 add to cart or Buy Direct from
Argosy Book Store
Share this item

D.T. Valentine , 1851
(click for more details about New York)
View all from this seller>