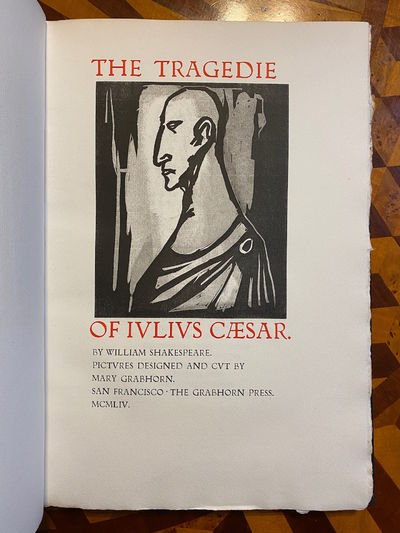 by [Grabhorn Press]. Shakespeare, William
San Francisco: The Grabhorn Press, 1954. First edition thus. Very good. Large folio. [2], LIV, [1] ff. Printed in red and black. With 7 half-page linoleum-cut illustrations by Mary Grabhorn. Original publisher's boards after a design by Grabhorn, red morocco spine (slight nicks at head and tail). Very light occasional foxing as is true in all copies. In excellent condition. Limited to 180 copies, ours is the only copy currently on the market. Since 1975 only four copies have appeared at auction (the most recent being sold in 2014).

A powerful piece of American fine printing, executed throughout in "uppercase" Inkunabula type, with arresting linoleum cuts by Edwin Grabhorn's daughter Mary which -- in certain respects -- remind us of the work of Leonard Baskin. She illustrated this and other Shakespeare editions printed by the Grabhorn Press. The celebrated and award-winning printing operation was family run, and known for works that combined bold simplicity with a unique use of color. The Press was established in 1915 in Indianapolis, when brothers Edwin and Robert Grabhorn began printing under the name Studio Press. In 1919, the Grabhorns relocated their firm to San Francisco, where it flourished until 1965.

Computer Art and Human Response. [Together with]: The Long Ride

Charlottesville, Virginia : Paul B. Victorius , 1968
(click for more details about Computer Art and Human Response. [Together with]: The Long Ride)

[HAWAII 1822]. Instructions to the Missionaries about to Embark for the Sandwich Islands; and to the Rev. Messrs. William Goodell, & Isaac Bird, Attached to the Palestine Mission

by American Board of Commissioners for Foreign Missions

Boston : Crocker and Brewster , 1823
(click for more details about [HAWAII 1822]. Instructions to the Missionaries about to Embark for the Sandwich Islands; and to the Rev. Messrs. William Goodell, & Isaac Bird, Attached to the Palestine Mission)
View all from this seller>