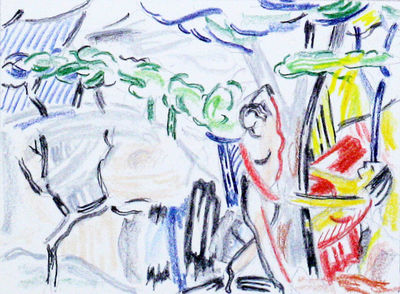 "The twenty-four drawings in this sketchbook are 'all landscapes, figures, and houses, but they are essentially landscapes.' They do, in part, recall certain of his landscape images of the mid-sixties. However, now devoid of the familiar Lichtenstein dots, each is composed exclusively of brushstrokes-a combination of free, seemingly spontaneous marks evoking Abstract Expressionism played against what the artist refers to as 'cartoon' brushstrokes that continue to represent his concern for artifice...

"[The] drawings in Landscape Sketches 1984-1985, inspired by a semiabstract landscape that appeared as an element in his recent Paintings series, constitute his first attempt at creating 'plain landscapes out of all brushstrokes'-the frankly 'fake' or cartoon marks providing the link that allows us to associate these new works with those we recognize as archetypal." (Constance W. Glenn, Introduction).

Note: In addition to the 100 signed and numbered copies there were an additional 10 artist's proofs issued.

Illuminated Manuscript Leaf with Miniature of The Annunciation

France : np , 1480
(click for more details about Illuminated Manuscript Leaf with Miniature of The Annunciation)

New York : np , 1915
(click for more details about Typed Letter Signed with Autograph Additions [TLS])
View all from this seller>