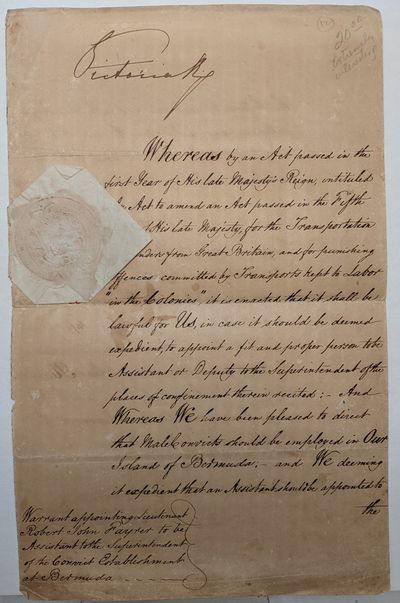 by VICTORIA, Queen (1819-1901)
1844. very good. PRISONERS IN PARADISE! Exceptional Manuscript Document signed "201CVictoria", folio, 2 pages, Bermuda, Secretary's Office, October 12th 1844, a Warrant appointing Lieutenant Robert John Fayrer to be Assistant to the Superintendant of the Convict Establishment at Bermuda, in small part: "an Act Passed... for the Transportation of Offenders from Great Britain, and for punishing "Offences committed by Transports kept to Labor "in the colonies", it is enacted that it shall be lawful for US, in case it should be deemed expedient, to appoint a fit and proper person to be Assistant of Deputy to the Superintendant of the places of confinement therein recited: And Whereas We have been pleased to direct that Male convicts should be employed in Our Island of Bermuda: and WE deeming it expedient that an Assistant should be appointed to the Superintendant... so far as relates to the Convicts employed, or to be employed in Our said Island of Bermuda, are hereby pleased to nominate and appoint Robert John Fayrer, Overseer of the Tendos Hulk, to be Assistant to such Superintendant, as aforesaid, in Our said Island of Bermuda, to do all Acts, Matters, and Things, as such Superintendant is legally authorized to do, under, and by virtue of the Acts before mentioned, during our Pleasure. Given at our Court at Saint James, the 7th day of September 1844, in the Eighth Year of Our Reign..." Boldly signed and in very good condition. *From 1823 to 1863, Bermuda received around 9,000 British and Irish Convicts, in a system managed by the Home Office. The Convicts were mainly kept onboard prison Hulks, most moored off the Naval dockyard; and for a brief period the town of St. Georges. They undertook massive Publics Works, most notably the building of the Dockyard. The Tendos Hulk mentioned in the above document was a notorious Hospital Prison Ship that was originally sent to Bermuda a year earlier (1843) to house Convicts that were afflicted during the Yellow Fever Epidemic. It was commanded by Naval Officer Robert John Fayrer who was appointed by Queen Victoria (in this document) "Assistant to the Superintendant of the Bermuda Convict Establishment". VICTORIA (1819-1901) Queen of the United Kingdom of Great Britain and Ireland from June 30th 1837 until her death on January 22nd 1901. (Inventory #: 298534)
$1,500.00 add to cart or Buy Direct from
Argosy Book Store
Share this item

Norwalk : Easton , 1996
(click for more details about Years of Upheaval)

Collection of military maps and plans from Fort Dix, NJ

New Jersey : United States Army
(click for more details about Collection of military maps and plans from Fort Dix, NJ)
View all from this seller>