THE PATH TO HOME 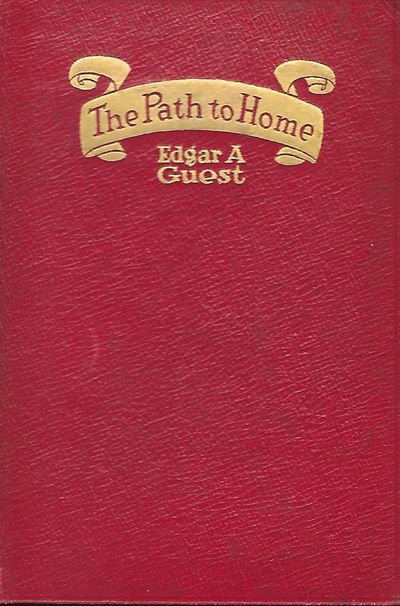 by GUEST, Edgar A.
Chicago: The Reilly & Lee Co., 1919. First Edition. Signed presentation from Guest on the half-title page: "For F.W. Teele:- Here's hoping you will always find peace & happiness along [then "The Path To Home title], Sincerely yours, Edgar A. Guest. Oct. 18, 1922." Edgar Albert Guest [1881-1959] was a British-born American poet who was popular in the first half of the 20th century and became known as the People's Poet. His poems often had an inspirational and optimistic view of everyday life. Guest was a copy boy and then a reporter at the Detroit Free Press where his first poem appeared on December 11, 1898. For 40 years, Guest was widely read throughout North America and is known for his sentimental, optimistic poems. Guest penned some 11,000 poems which were syndicated in about 300 newspapers and collected in more than 20 books. He was made Poet Laureate of Michigan, the only poet to have been awarded the title. His grand-niece Judith Guest is a novelist who wrote "Ordinary People." Fred Warren Teele was appointed by Rotary International to develop and coordinate Rotary Club activities in Continental Europe and in 1923 its Regional Office opened in Zurich, Switzerland. Guest was an active member of the Detroit Rotary Club. 16mo., limb red faux-leather, stamped in gilt, top edge gilt; 192 pages. Very Good (covers nice, gilt bright; contents clean & tight). (Inventory #: 57273)
$75.00 add to cart or Buy Direct from Antic Hay Books
Share this item
Antic Hay Books
Offered by

THE WHEEL OF TIME: A BIOGRAPHY OF L.M. MONTGOMERY, AUTHOR OF ANNE OF GREEN GABLES

London : Harrap , 1976
(click for more details about THE WHEEL OF TIME: A BIOGRAPHY OF L.M. MONTGOMERY, AUTHOR OF ANNE OF GREEN GABLES)