Cruise of the United States Frigate Potomac Round the World, During the Years 1831-34. 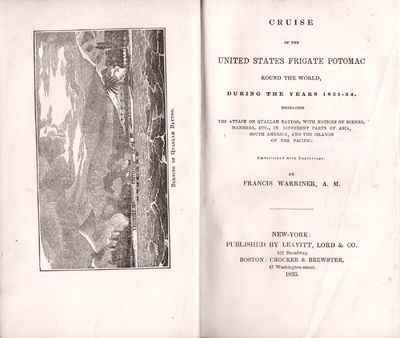 by Warriner, Francis.
New York: Leavitt, Lord & Co., 1835. First edition of a book of interest in several respects. This was the first west-to-east circumnavigation by a U.S. warship, and one of the first official U.S. expeditions into the Pacific. It was also probably our earliest prototype for a Granada-like incident. In order to avenge some supposed wrongs inflicted upon an American merchant vessel, the Potomacs Captain, John Downes, stormed the Sumatran city of Quallah Batoo and destroyed a good part of it. Finally, there is whaling interest here. The Potomac visited Rio... Cape Town, Sumatra, Batavia, the Philippines, Macao and Canton... Hawaii, Tahiti... and the Galapagos Islands... Included is a description of U.S. Whaling activity off the coast of South America; one of the plates is of a whaling scene. Hill 1831. Forster p. 610. Hunnewell p. 72. The author was a teacher hired by Commodore John Downes to join the expedition to put a stop to the raiding of American merchant vessels by pirates in the East Indies. Scattered foxing in text. Bound in publishers green cloth; spine tanned and lightly damaged at the top.. 366 pp. plus 12 pp. publishers catalog. b/w plates. (Inventory #: 42871)
$300.00 add to cart Available from
Ten Pound Island Book Co.
Share this item