The New Sailing Directory for the Ethiopic or Southern Atlantic Ocean. 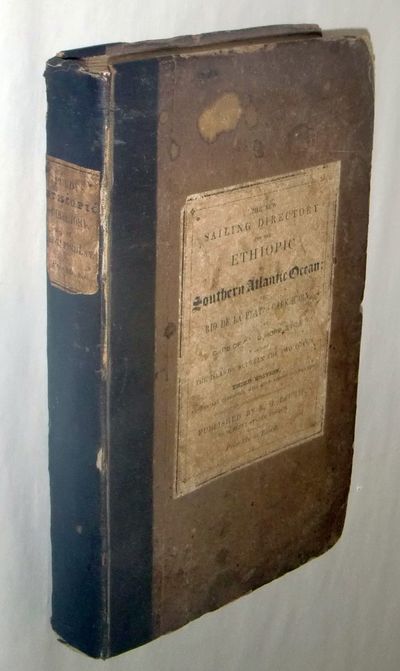 by Purdy, John.
London: R.H. Laurie, 1845. Including the coasts of Brasil, etc. to the Rio de la Plata, the coast thence to Cape Horn, and the African coast to the Cape of Good Hope, etc. This is the third edition, with additional material and a handsome stationer's ticket of "William C. Taber & Son, New Bedford" on the front pastedown. The South Atlantic waters were hunting grounds for whalemen, particularly in the first half of the 19th century, and a whaleman certainly used this copy. The back blank contains 6 handsome sperm whale stamps, printed in brown ink, and the pencil inscription "Warren Aikin Jr. Mattapoisett, Massachusetts. Emma F. Aikin." Ancestry.com has a marriage record for Warren Aiken, jr. born 1832, to Emma F. Snow in 1860. I can't find an occupation for Warren, but his father, Warren Sr., is listed in the US census as "Mariner." The book is bound in original cloth over boards with paper cover and spine labels. The outer joints are split, and the cover shows some wear, but the binding is still tight. An unusual relic from the Golden Age of American whaling. . xlviii, 472 pp. b/w recognition views and 7 inked whale stamps. (Inventory #: 42885)
$450.00 add to cart Available from
Ten Pound Island Book Co.
Share this item