Illustrated catalogue of the valuable paintings and sculptures by the old and modern masters forming the famous Catholina Lambert Collection, removed from Belle Vista Castle, Paterson, New Jersey to be sold at unrestricted public sale ... in the Plaza Hotel, New York, [February 21st, 22nd, 23rd and 24th] ; [on free public view at the American Art Galleries , beginning ... February 12th, 1916 and continuing until the morning of the date of sale, inclusive] 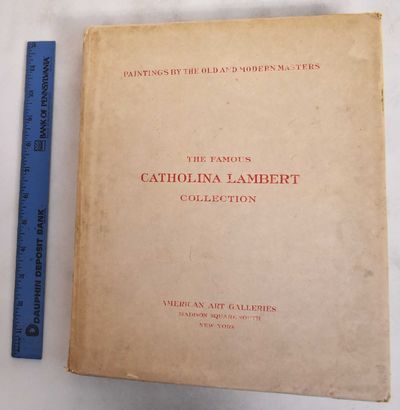 by NY: American Art Galleries, Feb. 21 - 24, 1916
New York: American Art Galleries, 1916. VG Subscribers copy #4384/600 copies. Stiff wraps. Appx. 100 (of 101) bw plates with tissue guards. LACKING FRONTIS. Included in this mighty sale were works by Blakelock (11), George H. Bogert (1), Frank M. Boggs (1), Augusat Franzen (2), Hassam (1), E.L. Henry (1), George Inness (1), Frederick W. Kost (1), George Herbert McCord (1), Arthur Parton (1), Arthur Quartley (1), Frank K.M. Rehn (2), Carleton Wiggins (1), Hiram Powers (1). Also notable is the strength of this collection in Old Masters and French Impressionists. There are 29 works by Adolphe Monticelli. This is a deluxe version of the catalogue, being in a lerge format and containing hundreds of bw plates of the works. A total of 400 lots were sold over the course of four sessions and grossed a total of $590,420-an astronomical sum for the time. The second night of the sale was one of the most successful picture auctions held in New York to that time, grossing $238,60 for 101 lots. Though small in number, the American works at this sale held their own to the amazement of those present. A Blakelock sold for an incredible $20,000-passing by far pictures by such established Europeans as Corot, Monet, Renoir and Monticelli. This copy has the prices realized and the buyers' names written in the margins, and also has a prices realized list. It is copy No. 369 of a stated issue of 600 large format copies. Mr. Lambert was a very wealthy silk manufacturer from Paterson, NJ, and these paintings were housed in his large home known as Belle Vista Castle. It represented one of the finest collections in private hands, and this catalogue is an important documentation of the collection and his taste. (Inventory #: 181491)
$100.00 add to cart or Buy Direct from Mullen Books
Share this item