A plea for Africa. A sermon preached October 26, 1817, in the First Presbyterian Church in the city of New-York, before the synod of New-York and New-Jersey, at the request of the Board of Directors of the African School established by the synod 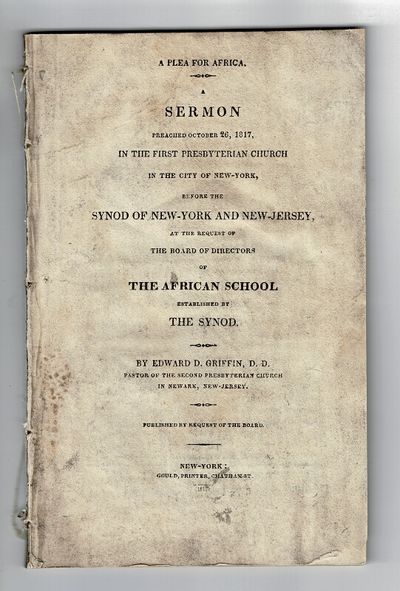 by Griffin, Edward D.
New-York: Gould, printer, Chatham-St, 1817. 8vo, pp. 76; removed from binding, wrappers wanting, title page soiled and loosening; leaves H1-I6 with short tears repaired, occasionally affecting a word or two; all else very good. "In this pamphlet Dr. Griffin examines the place of Africans in the Bible, identifying them with the Ethiopians and the Cushites. He relates the history of slavery from ancient times to modern, and pleads for the necessity of educating the Negro race in the principles and practices of Christianity. He lists by name 54 negroes and mulattoes [among whom Phillis Wheatley, Benjamin Banneker, Paul Cuffee, Ignatius Sancho, and Touissant L'Ouverture] who had made accomplishments in learning and science. The foundation by the Presbyterian Synods of New York and New Jersey of the African School at Parsippany for the education of Negros to the Christian ministry is the occasion for this Plea, and the proposed work of that institution is described at length. "The Presbyterian Church of New Jersey founded an African School in Parsippany in 1817 to train black missionaries for the colonization movement and received financial support from blacks" (Hodges, Root and Branch: African Americans in New York and East Jersey, 1613-1863. American Imprints 40956; Afro-Americana 4366; Sabin 28818. (Inventory #: 57830)
$862.50 add to cart or Buy Direct from
Rulon-Miller Books
Share this item