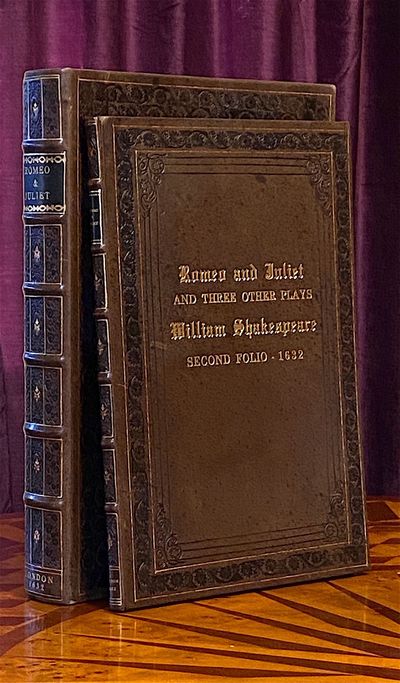 by Shakespeare, William
London: Tho. Cotes, for Robert Allot, 1632. Very good. 106 pp. Collation: aa-hh6, ii5 (sic. cc signed "bb"). Text printed in two columns. One column of fol. gg4 (p. 79/80) in Titus Andronicus with 4.5" x 4" facsimile, affecting 24 lines of text and the running title of the play, extended into upper blank margin. Some occasional foxing or browning to the text, although the paper stock is pleasingly crisp and strong. Bound by Starr Bookworks in retrospective "19th-century" calf, elaborate blind-tooled borders and corner ornaments, with matching clamshell case similarly decorated. In every way an imposing book. Four Shakespeare tragedies extracted from the 1632 Second Folio, including the most famous tragedies ever written in English, and one of the most famous tragedies in any language, namely ROMEO AND JULIET, bound together with three other important tragedies from the Second Folio: TITUS ANDRONICUS, CORIOLANUS, and TROYLUS and CRESSIDA. Romeo and Juliet is arguably the most sought-after of all the plays in the Shakespearian canon, and it remains one of the finest works of Elizabethan drama. The plot and characters are so justly famous that no introduction is required; however, some bibliographical points are worth noting: the play first appeared in the First Folio of 1623 (there were no quarto editions that preceded it) followed by the present Second Folio edition of 1632.

The four tragedies bound herein are incredibly deep and complex, with intense psychological drama, followed by epic calamities. It has been included (correctly we think) among Shakespeare's late romances, which alongside The Tempest, were written towards the end of his life, and at the height of his powers.

¶ As is well known, the so-called First Folio edition of Shakespeare's incomparable "Comedies, Histories, and Tragedies" is now practically unobtainable; today even single plays from the First Folio sell in the six-figures. We are honored to be able to offer this imposing volume of four plays from the Second Folio, and we will probably regret selling it at any price.

[ALBUM OF 136 ENGLISH AND AMERICAN ENGRAVINGS 1750-1800, PRINCIPALLY AMERICANA]. "A Collection of Caricatures, Portraits, Maps, Etc. Taken from the several English Magazines published between the years 1750 and 1800

London and New York 1800
(click for more details about [ALBUM OF 136 ENGLISH AND AMERICAN ENGRAVINGS 1750-1800, PRINCIPALLY AMERICANA]. "A Collection of Caricatures, Portraits, Maps, Etc. Taken from the several English Magazines published between the years 1750 and 1800)
View all from this seller>