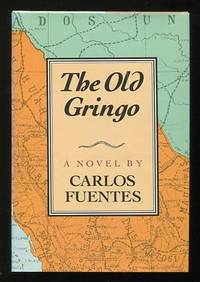 by Fuentes, Carlos; translated by Margaret Sayers Peden and the author
New York: Farrar Straus Giroux. Fine in Near Fine dj. 1985. 3rd printing. Hardcover. [book is tight, clean, as-new, with no discernible wear; jacket is the same, but is very slightly faded (color-shifted) in the middle section of the spine]. INSCRIBED (in Spanish) and SIGNED by the author on the front endpaper. Novel set during the Mexican Revolution of 1914, that "tells the story of Ambrose Bierce, the American writer, soldier, journalist, and his last mysterious days in Mexico among [Pancho] Villa's soldiers." The 1989 film adaptation, from a screenplay by Fuentes, provided Gregory Peck with one of his meatiest late-career roles (as Bierce) -- a part that came his way only because the actor initially tapped for the part, Burt Lancaster, was deemed uninsurable by the production company due to his precarious health at the time. Signed by Author . (Inventory #: 26347)
$40.00 add to cart Available from ReadInk
Share this item
ReadInk
Offered by