The Girl and the Game, and Other College Stories 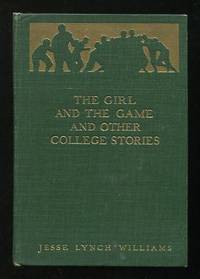 by Williams, Jesse Lynch
New York: Charles Scribner's Sons. Very Good+. 1908. First Edition. Hardcover. (decorated dark green cloth; no dust jacket) [sharp-looking copy, very slight wear at a couple of corners, gilt lettering and decoration on front cover and spine quite bright and attractive; vintage bookplate on front pastedown, with one-time owner's name scraped away; rear hinge is starting, and the rear endpaper has a former owner's name scrawled in pencil, plus (apparently) the same person's nickname, "Woodie," written on the rear pastedown]. (B&W illustrated plates) Eight short stories of college life -- based, no doubt, on the author's experiences at Princeton, although no particular school is named in the book. (It was, in fact, his third book of such tales, having been preceded by "Princeton Stories" (1895) and "The Adventures of a Freshman" (1899).). In addition to the eight stories, there are eight additional shorter pieces, grouped together at the end of the book under the umbrella title "Talks With a Kid Brother," each of which offers some sage advice from an elder classman, on topics such as "The First Day at College," "On Hazing," "Trying for the Team," and "Concerning Horse-Play." . (Inventory #: 26355)
$45.00 add to cart Available from ReadInk
Share this item
ReadInk
Offered by