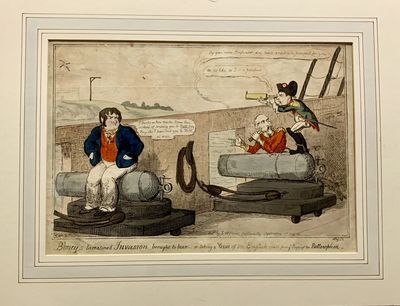 by Cruikshank, George (Illustrator)
London: S.W. Fores, 1815. First edition. Pictorial Boards. Mat and illustration. Fine. Hand colored engraving 13 3/4 x 9 3/4 inches in mat 19 x 15 inches. An ironic allusion to Napoleon's invasion of England For Elba as Hell Bay. As Napoleon views the coast Bertrand says, "By gar! mon Emperor. dey have erect von prospect for you/" To which Napoleon replies, "Me no like de D--n prospect." John Bull sitting on the cannon, scowls at him saying "I think how Master Boney, that instead of sending you to Hell-Bay they sho'd have sent you to Hell at once." Slight crease running vertically at center. Color are sharp and bright. (Inventory #: 22528)
$650.00 add to cart or Buy Direct from
Roy Young Bookseller
Share this item
Roy Young Bookseller, Inc.
Offered by