A Restitution of Decayed Intelligence: In Antiquities. Concerning the most noble and renowned English Nation; By the Studie and travell of R.V. Dedicated unto the Kings most excellent Majestie 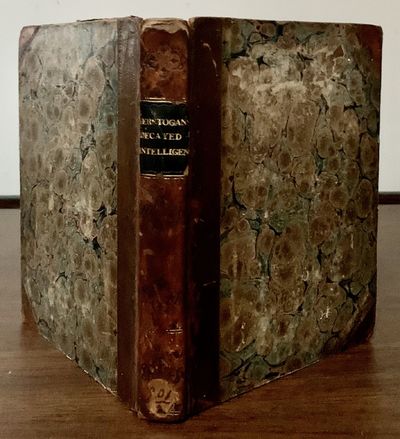 by Verstegan, Richard [Richard Rowlands]
London: John Bill, 1628. First English edition. Hardcover. Later half calf and marble boards. Very good. 338 [14] pages. [*4-***4, A4-Vv4, Xx3]. 9.6 x 7.5 cm. First few leaves with early ink margin notes. Considered to be "a seminal work of Anglo-Saxon scholarship'" (ODNB) and the best edition for the quality and number of its engravings. Born Richard Rowlands, he took his grandfather's name after being exiled for printing without authority an account of Edmund Campion's execution. From 1617 to about 1630 Verstegan was a prolific writer in Dutch, producing epigrams, characters, jestbooks, polemics. A Dutch-English Catholic, started printing after being refused at Oxford for being a Catholic. This work presents an account of the early invasions of Great Britain, the formation of its language, surnames, a dictionary of Anglo-Saxon, and other matters. STC 21361. Rubbing to extremities, black leather spine label printed in gilt, interior contents generally clean, some black letter interspersed within text. (Inventory #: 22525)
$975.00 add to cart or Buy Direct from
Roy Young Bookseller
Share this item
Roy Young Bookseller, Inc.
Offered by