Case-Book of Sherlock Holmes, The 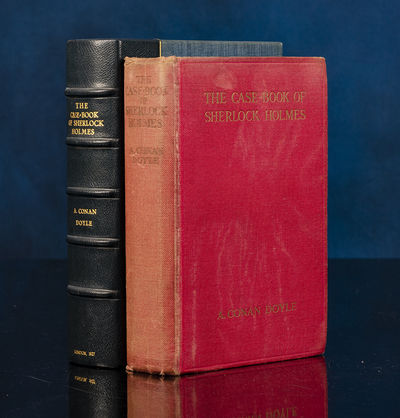 Publisher's red fine diaper-grain cloth with front cover ruled in blind and lettered in gilt and spine lettered in gilt. Spine faded and gilt dull. Free endpapers slightly browned from pastedown glue. Small stain at foot of pp. 256/257 and p. 309. Armorial bookplate of Guernsey on front free endpaper. Chemised in a quarter dark blue morocco clamshell case, spine with five raised bands, lettered in gilt in compartments. A good copy only - but nicely presented in a custom half morocco slipcase.

"The author had not intended to continue the Sherlock Holmes stories after ‘His Last Bow'; but, when he had finished The British Campaign in France and Flanders, he felt more kindly disposed towards the subject than ever before. He was particularly impressed by the Stoll films, which began production in November 1920 with Eille Norwood as Sherlock...There was a revival of interest in Sherlock Holmes when the films were released" (Green and Gibson, p. 203).

London: T. Fisher Unwin, 1896
(click for more details about An Outcast of the Islands)