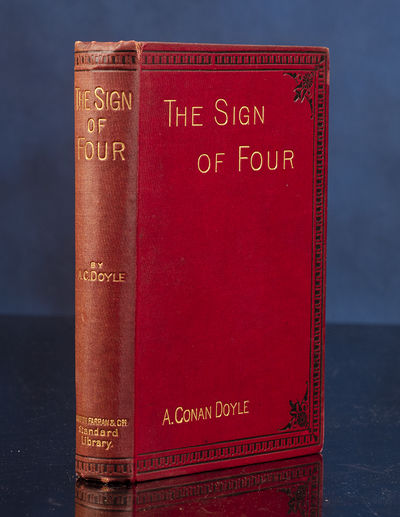 by DOYLE, Arthur Conan; KERR, Charles, illustrator
London: Spencer Blackett, 1890. This is all an insoluble mystery to me," said I. "It grows darker instead of clearer."
"On the contrary," he answered, "it clears every instant."

Publisher's dark red fine-ribbed cloth blocked in black with front cover and spine lettered in gilt. All edges uncut. Dark brown coated end-papers. The bare minimum of rubbing to corners and spine extremities, the original endpapers fine, inner hinges untouched. One of the best copies that we have ever seen.

"The [remaining] sheets of the first edition were reissued by Griffith Farran and Company with the original [Spencer Blackett] title-page. The covers are the same though the imprint at the foot of the spine reads: "Griffith Farran & C.o.s/Standard/Library " Dark brown endpapers. Issued 1891. There are 8 pp. of publisher's advertisements in some copies, though not all. (Green & Gibson, p. 34).

The second Sherlock Holmes story after A Study in Scarlet (1888). At the time, it received only moderate success, but after the publication of the stories in Adventures (1892) and Memoirs (1894) its popularity soared.

Originally titled "The Sign of the Four; or, The Problem of the Sholtos," this early Sherlock Holmes mystery was first published in Lippincott's Monthly Magazine, Philadelphia, February 1890, and was first published in book form that October in London. The plot concerns Holmes's investigation into the murder of Bartholomew Sholto, his search for Jonathan Small and the Agra treasure, and Watson's romance with Mary Morstan.