Principles of Political Economy, Considered With a View to their Practical Application. 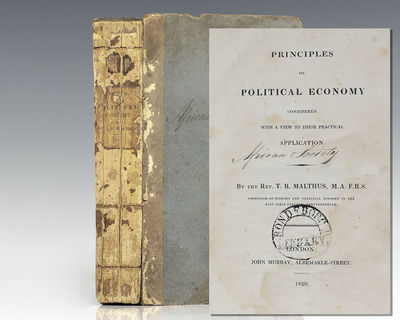 by Malthus, Thomas Robert
London: John Murray, 1820. First edition of this classic work regarding nature of labor, demand and profit. Octavo, original boards, retaining the original paper spine label. In very good condition. Ownership inscription from the African Society and stamp to the title page. Rare in the original boards. "There can be no doubt that [Malthus'] importance for economists today rests mainly on his Principles of Political Economy. It was because of this latter work that J. M. Keynes (1933) reinstated Malthus as a major figure in modern economic thought" (New Palgrave). "In his 'Principles of Political Economy', Malthus was proposing investment in public work and private luxury as a means of increasing effective demand, and hence as a palliative to economic distress. The nation, he thought, must balance the power to produce and the will to consume" (DSB). "The Principles had only a limited impact at the time, and was severely criticized by J. R. McCulloch and Ricardo; the latter prepared extensive critical notes. But more recently it has received greater recognition, largely as a result of the comments by J. M. Keynes in the 1930s. Keynes argued that Malthus's theory of effective demand provided a scientific explanation of unemployment, and that the hundred-year domination of Ricardo over Malthus had been a disaster for the progress of economics. Keynes believed that if economics had followed Malthus instead of being constrained by Ricardo in an artificial groove, the world would be a much wiser and richer place" (ODNB). (Inventory #: 119668)
$4,200.00 add to cart or Buy Direct from
Raptis Rare Books
Share this item

New York : Simon and Schuster , 1955
(click for more details about The Europeans.)


(click for more details about Winston S. Churchill Presentation Cigar.)
View all from this seller>