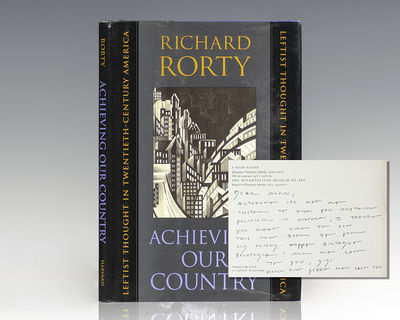 by Rorty, Richard
Cambridge: Harvard University Press, 1998. First edition, second printing of Rorty's treatise on the American Left in the 20th century. Octavo, original half cloth. Association copy, from the library of Alvin Feinman with an autograph postcard signed by Rorty to him laid in which reads, "Dear Alvin, Although it's not my custom in giving you anything political in nature, I thought you might like to see this new book by your old friend. Happy Birthday Belatedly! All my love to you, R.R. Please give Debbie my love too." The recipient, Alvin Feinman, was a renowned American poet. His influences included poets William Blake, William Wordsworth, and Percy Bysshe Shelley and philosophers Derrida, Heidegger, and Rorty himself. Fine in a near fine dust jacket. Jacket design by Annamarie McMahon. Must the sins of America's past poison its hope for the future? In Achieving Our Country, one of America's foremost philosophers argues that the American Left, withdrawing into the ivied halls of academe to rue the nation's shame, has answered yes in both word and deed. Rorty challenges this lost generation of the Left to understand the role it might play in the great tradition of democratic intellectual labor that started with writers like Walt Whitman and John Dewey. (Inventory #: 120101)
$475.00 add to cart or Buy Direct from
Raptis Rare Books
Share this item

The Four Pooh Books: When We Were Very Young; Winnie-The-Pooh; Now We Are Six; The House At Pooh Corner.

San Francisco : Harper Collins , 1993
(click for more details about The Alchemist: A Fable About Following Your Dream.)
View all from this seller>