One of Us: A Biography of Margaret Thatcher. 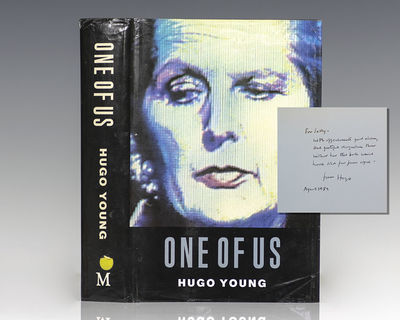 by Young, Hugo [Margaret Thatcher]
London: Macmillan London Limited, 1989. First edition of Young's major biography of Thatcher based on the intimate conversations of a decade with all the major politicians of the period. Octavo, original cloth, illustrated with photographs. Association copy, inscribed by the author on the front free endpaper in the year of publication to Sally Soames, who provided the cover photograph of Thatcher, "For Sally - with affectionate good wishes, and grateful recognition that without here this book would have sold far fewer copies - from Hugo April 1989." With Soames' notation beneath the inscription, "photo on jacket Caf. 1981." The recipient, British photojournalist Sally Soames, worked for The Sunday Times from 1968 until 2000 and was highly regarded for her exclusively black and white portraits of many of the most prominent figures of the 20th century including Menachem Begin, Margaret Atwood, Margaret Thatcher, Sean Connery, Rudolf Nureyev, Alec Guinness and Andy Warhol. Soames, who was known to be a warm and personal journalist, performed extensive research on her subjects and developed intimate rapports with them during her process, resulting in striking and revealing portraits. In addition to the several world leaders Soames came to know and photograph, she captured the unique personalities of some of the world's most gifted authors, poets, and playwrights. She published two books of photographs during her lifetime: Manpower (1987) with text by Robin Morgan and an introduction by Harold Evans and Writers (1995) with a preface by Norman Mailer. Near fine in a very good dust jacket. Jacket design by Bostock and Pollitt. Jacket photograph by Sally Soames. Author photograph by Dominic Young. Hugo Young's biography is by far one of the fullest accounts of Margaret Thatcher's life from her political formation as the daughter of a Grantham alderman, through her apprenticeship under Harold Macmillan and her unquestioning participation in the government of Edward Heath, to her systematic destruction of the Conservatism of the 1950s and 1960s and her emergence as the senior statesperson of the western world. (Inventory #: 119424)
$400.00 add to cart or Buy Direct from
Raptis Rare Books
Share this item