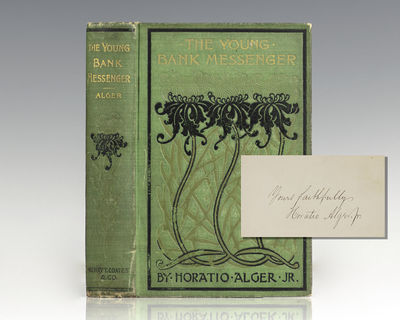 by Alger Jr., Horatio
Philadelphia: Henry T. Coates & Co, 1898. First edition of Alger's classic novel. Octavo, original illustrated cloth. With an autograph note by the author laid in which reads, "Yours faithfully Horatio Alger Jr." In near fine condition. Alger signatures are uncommon. Horatio Alger Jr. penned over one hundred young adult novels during his lifetime about impoverished boys and their rise from humble backgrounds to lives of middle-class security and comfort through good works. His writings were characterized by the "rags-to-riches" narrative, which had a formative effect on the United States during the Gilded Age. He is buried in Natick, Massachusetts and since 1947, the Horatio Alger Association of Distinguished Americans has awarded scholarships and prizes to deserving individuals. (Inventory #: 119646)
$2,000.00 add to cart or Buy Direct from
Raptis Rare Books
Share this item