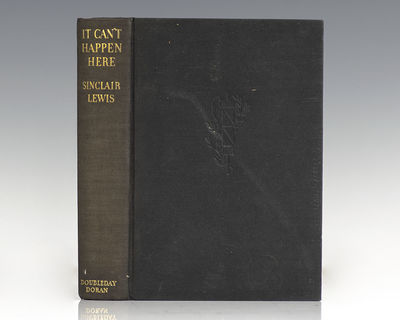 by Lewis, Sinclair
Garden City, NY: Doubleday, Doran & Company, 1935. First edition of Lewis' later masterpiece. Octavo, original cloth. In near fine condition, lacking the dust jacket. In 1930, Sinclair Lewis became the first writer from the United States to receive the Nobel Prize in Literature, which was awarded "for his vigorous and graphic art of description and his ability to create, with wit and humor, new types of characters." His works are known for their insightful and critical views of American capitalism and materialism between the wars.[1] He is also respected for his strong characterizations of modern working women. H. L. Mencken wrote of him, "[If] there was ever a novelist among us with an authentic call to the trade ... it is this red-haired tornado from the Minnesota wilds." It Can't Happen Here is the only one of Sinclair Lewis's later novels to match the power of Main Street, Babbitt, and Arrowsmith. A cautionary tale about the fragility of democracy, it is an alarming, eerily timeless look at how fascism could take hold in America. Written during the Great Depression, when the country was largely oblivious to Hitler's aggression, it juxtaposes sharp political satire with the chillingly realistic rise of a president who becomes a dictator to save the nation from welfare cheats, sex, crime, and a liberal press. Called "a message to thinking Americans" by the Springfield Republican when it was published in 1935, It Can't Happen Here is a shockingly prescient novel that remains as fresh and contemporary as today's news. (Inventory #: 120396)
$125.00 add to cart or Buy Direct from
Raptis Rare Books
Share this item

A Good Man in Africa.

London : Hamish Hamilton , 1981
(click for more details about A Good Man in Africa.)

Boston : Little, Brown and Company , 1946
(click for more details about Brideshead Revisited.)
View all from this seller>