There are things to do 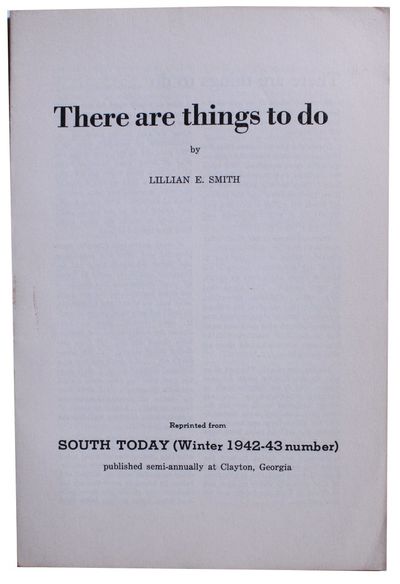 This is a pamphlet on how to improve race relations written by a Caucasian southern woman. Lillian Smith was an outspoken critic of segregation and Jim Crow laws and published a magazine out of Clayton, Georgia, "South Today." She also ran the Laurel Falls Camp for Girls. Her partner in both ventures was a camp counselor named Paula Snelling with whom Smith quietly maintained a lifelong romantic relationship. Smith's novel "Strange Fruit", which revolved around an interracial romance, was banned for lewdness in Boston and Detroit with the Massachusetts Supreme Court ultimately ruling it was obscene. Like a number of progressive authors of this era, the FBI maintained a file on Smith, commenting that the language of "Strange Fruit" would "aggravate a serious juvenile delinquency problem which is of utmost interest at the present time."

This work is an offprint of an article Smith wrote that originally appeared in an issue of South Today. Smith argued that many southerners wanted to change the treatment of African Americans but feared that doing so would cause other harms such as violence against blacks or riots. She provided a series of steps people could take to slowly change race relations and broke them into three groups based on one's level of commitment for cause. She listed 14 "simple, undramatic things" which included a better understanding of black society by reading the black press, encouraging the elimination of racist jokes and terms, and making friends with a black person. For those willing to take a stronger stand, she suggested pushing school boards to include African American history or publicly calling out a shop owner who mistreated a black person. Of the highest level of commitment which also meant the likelihood of putting oneself in danger, she wrote, "more and more white southerners, who have poise and self control, must speak clearly and publicly against segregation of Negroes on buses . . . more and more respectable white southerners must break the taboo of silence . . . more and more must break the taboo of action: by eating with Negroes, by sitting by them in public places, by having them in their homes." Presciently, she ended with, "we are now in the midst of a total world war and a total economic-race revolution. Things are happening; things are going to continue to happen. We can sputter and break a blood vessel, or we can roll up our sleeves and get to work to make them happen smoothly and harmoniously. The choice is ours only in what we do about it; not in the changes themselves."

A quick reference guide on southern race relations for activists at all levels, written by a white southern lesbian at the dawn of the modern Civil Rights Movement.

This item is offered by Langdon Manor Books, LLC, antiquarian booksellers. Please do not hesitate to contact us for additional information and/or photos and we will respond promptly. We package our items carefully, ship daily, and have a no hassle returns policy--your satisfaction is guaranteed. We are members of the Antiquarian Booksellers' Association of America (ABAA), the International League of Antiquarian Booksllers (ILAB) and the Independent Online Booksellers Association (IOBA) and adhere to their rules of ethics. (Inventory #: 2880)
$350.00 add to cart or Buy Direct from
Langdon Manor Books
Share this item