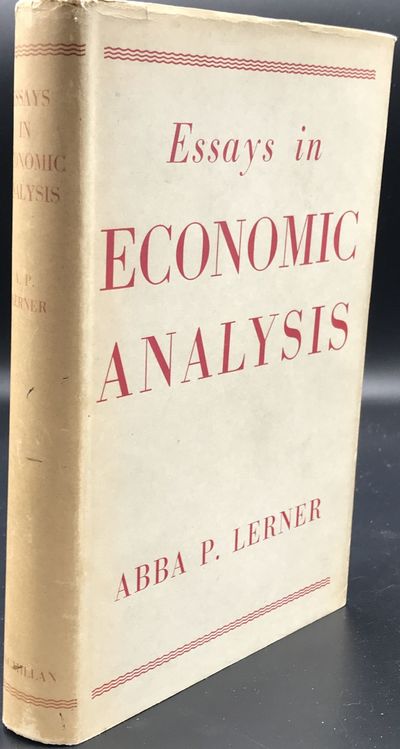 by Lerner, Abba P.
London: Macmillan & Co., Ltd, 1953. 8vo. viii, 394pp. Red lettered gray dust jacket. Some offsetting to pastedowns, else very good. "Abba Lerner was the Milton Friedman of the left. Like Friedman, Lerner was a brilliant expositor of economics who was able to make complex concepts crystal clear. Lerner was also an unusual kind of socialist: he hated government power over people's lives. Like Friedman, he praised private enterprise on the ground that 'alternatives to government employment are a safeguard of the freedom of the individual.' Also like Friedman, Lerner loved Free Markets. He opposed Minimum Wage laws and other price controls because they interfered with the price system, which he called 'one of the most valuable instruments of modern society.' Lerner, like Friedman, had a sharp analytical mind that made him follow an argument to its logical conclusion. During World War II, for example, when John Maynard Keynes gave a talk at the Federal Reserve Board in Washington, Lerner, who was in the audience, found Keynes's view of how the economy worked completely convincing and challenged Keynes for not carrying his own argument to its logical conclusion. Keynes denounced Lerner on the spot, but Keynes's colleague Evsey Domar, seated beside Lerner, whispered, 'He ought to read The General Theory.' A month later, wrote Lerner, Keynes withdrew his denunciation." [see: his brief biography on the Library of Economics and Liberty website for quoted passages; the whole article is worth reading]. (Inventory #: 65484)
$65.00 add to cart or Buy Direct from
Bartleby's Books
Share this item