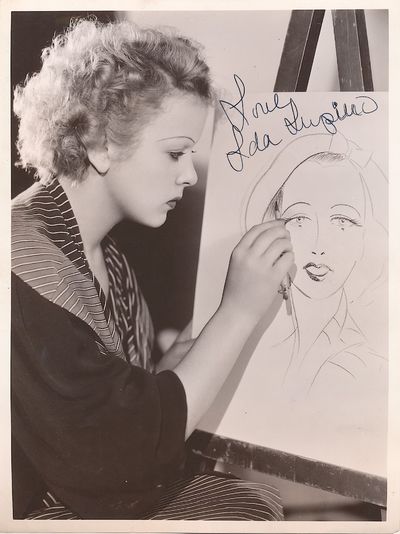 signed
by LUPINO, IDA
Lupino is shown seated at an easel with pencil in hand sketching a woman's face, perhaps herself.
The explanation attached on verso reads, ""Developing a Hobby - Ida Lupino; youthful Paramount featured player, keeps sketching materials at hand in her dressing room to provide a worthwhile diversion during leisure moments at the studio." Stamped upside, "Ref. Dept. June 29, 1934. N.E.A." Lupino would be 16 in this Paramount studios photograph. After establishing her career as an actor, she formed a production company in 1949 with her husband, Collier Young. The company examined controversial subjects related to women's lives. Its first project, "Not Wanted" (1949) focused on unwed motherhood. In the same year, she made her credited directing debut with "Never Fear" (a.k.a. "The Young Lovers") about a young polio stricken female dancer. She was the second woman to join the Directors Guild, (1950). Autograph (Inventory #: 4765)
$413.00 add to cart or Buy Direct from
Schulson Autographs
Share this item


(click for more details about Original Art. Two Drawings of Greenland, pen and ink sketches on one 8.25 x 11 sheet of drawing paper)