The Journals of Madam Knight and Rev. Mr. Buckingham. 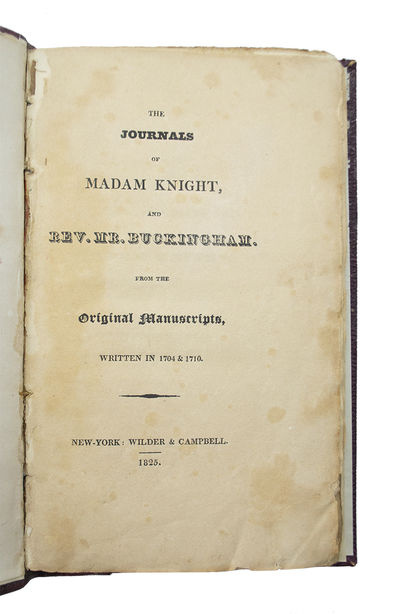 by KNIGHT, Sarah Kemble
ìThe Truest Picture Left to us of Provincial New Englandî KNIGHT, Sarah Kemble. The The Journals of Madam Knight and Rev. Mr. Buckingham.. From the Original Manuscripts, written in 1704 & 1710. New York: Wilder & Campbell, 1825. First Edition, taken from the original manuscripts written by Knight and Buckingham in 1704 and 1710 respectively. One twelve volume (). 129, [3, blank] pp. With general title, half-title for the Knight portion, and separate title-page for the Buckingham portion. The Buckingham journal with separate half-titles for the ìExpedition against Port Royalî and ìLand Expedition against Crown Point.î We could find no copies of this at auction in over 50 years. Quarter red leather over Morocco-grain cloth. Black calf spine label, lettered in gilt. Edges uncut. Pages with some fraying along edges. Pages with toning and staining as usual for American paper. The lower outer corner of pages 5-22, torn, possible paper flaw, but not affecting text. Page 23 with a one-inch closed tear, not affecting text. Overall a very good copy. ìIn 1704, [Sarah Knight] traveled to New York to settle a family estate, keeping a diary of her journey that was first published in 1825 in The Journals of Madam Knight, and Rev. Mr. Buckingham. The diary remains an important source on social conditions in the early eighteenth century... Recent analysis has been of the diaryís literary merits, which are regarded as extraordinary. Critics have placed her journal in the picaresque tradition, characterized by episodes of travel, comments on morals and manners, and the use of comedy. Knightís figurative language has been compared positively with the humor of Mark Twain. One commentator argued that Sarah Knight wrote with Homerís Odyssey in mind; by treating her own journey in mock heroic fashion and portraying herself as an urbane Bostonian in rural Connecticut she represents the Greek among the barbarians. Another view emphasized the range of Knightís reading; the poetic portions of the journal indicate acquaintance with Dryden and his contemporaries, while other passages show familiarity with the Elizabethan romances of Parismus and the Knight of the Oracle. Also, Knightís satiric tone, tolerant amusement with herself and others, and reference to God as her ìGreat Benefactorî suggest that she was acquainted with works of the early Enlightenment. In general, commentators have noted that the journal reveals a mind characterized by wit, intelligence, and refreshing independence.î (Dictionary of American National Biography) From the introduction, ìThis is not a work of fiction, as the scarcity of old American manuscripts may induce some to imagine; but it is a faithful copy from a diary in the author's own hand-writing, compiled soon after her return home, as it appears, fromnotes recorded daily, while on the road. She was a resident of Boston and a lady of uncommon literary attainments, as well as of great taste and strength of mind. She was called Madam Knight, out of respect to her character, according to a custom once common in New England; but what was her family name the publishers have not been able to discover.î According to George Parker Winship in the reprint edition of 1920 this is ìthe truest picture left to us of provincial New England.î The secondary work is ìThe private journals kept by Rev. John [i.e. Thomas] Buckingham, of the expedition against Canada, in the years 1710 & 1711 : from the original manuscripts.î Which contain, ìA diary of the naval expedition against Port Royal, in the year 1710î and ìA diary of the land expedition against Crown Point, in the year 1711.î From the Introduction: ìThe Diaries from which the following extracts are made, were written by Mr Buckingham, Minister of the second presbyterian in Hartford, Connecticut, during the against Canada, in 1710 and 1711, undertaken by the Colonies at the order of Queen Anne. The orthography in following pages is generally modernized.î HBS 68397. $1,100 (Inventory #: 68397)
$1,100.00 add to cart Available from
Heritage Book Shop
Share this item

Los Angeles : 1905
(click for more details about ìMemories, Some of the Dim Old Pictures That Hang on Memory's Wall.î)

Washington, D.C. : Printed by Order of the United States' Senate , 1843
(click for more details about Report of an Exploration of the Country Lying Between the Missouri River)
View all from this seller>