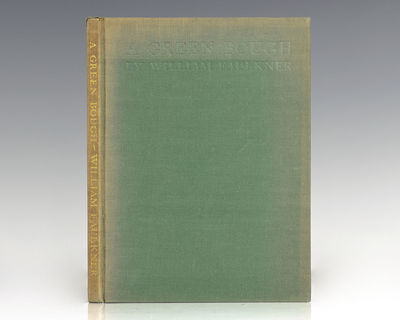 by Faulkner, William
New York: Harrison Smith and Robert Haas, 1933. First trade edition of Faulkner's second and final book of poetry. Octavo, original cloth. In very good condition with some toning to the extremitites. A Green Bough came out at the end of April [1933] without much fanfare. It was published as a favor to Faulkner by Hal Smith, with illustrations by Lynd Ward. The volume contained 44 poems, most of which were written very early in Faulkner's career and reflect his close reading of Eliot, Housman, Swinburne and Keats. One can hardly imagine that the author of these intensely literary poems is the same man who wrote Sanctuary or Light in August. This was Faulkner's farewell to poetry, and, as such, it warrants a glance. Poetry was the schoolhouse of Faulkner's fiction... A Green Bough remains a fairly accomplished collection that demonstrates a firm grasp on the craft of poetry" (Parini, 177). (Inventory #: 119704)
$100.00 add to cart or Buy Direct from
Raptis Rare Books
Share this item