The Collected Stories of Eudora Welty. 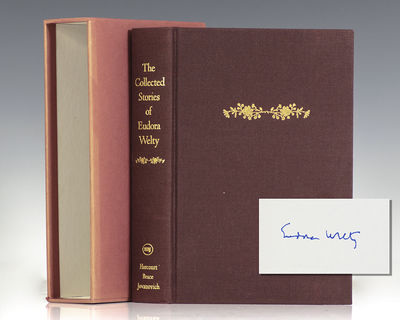 by Welty, Eudora
New York: Harcourt Brace Jovanovich, 1980. First signed limited edition of Eudora Welty's Collected Stories. Octavo, original cloth with gilt titles to the spine and gilt vignette to the front panel. One of 500 numbered copies signed by the author, this is number 160. In fine condition. Housed in the original slipcase which is in fine condition. Eudora Welty won the 1973 Pulitzer Prize and was later awarded the Presidential Medal of Freedom. She was also the first living author to have her works published by the Library of America. Her Collected Stories include the previously published collections: A Curtain of Green and Other Stories, The Golden Apples, The Wide Net and Other Stories, and The Bride of the Innisfallen and Other Stories. (Inventory #: 119394)
$400.00 add to cart or Buy Direct from
Raptis Rare Books
Share this item

The Virtue of Selfishness: A New Concept of Egoism.

New York : Signet Books , 1964
(click for more details about The Virtue of Selfishness: A New Concept of Egoism.)

New York : William Morrow and Company , 1971
(click for more details about The Dice Man.)
View all from this seller>